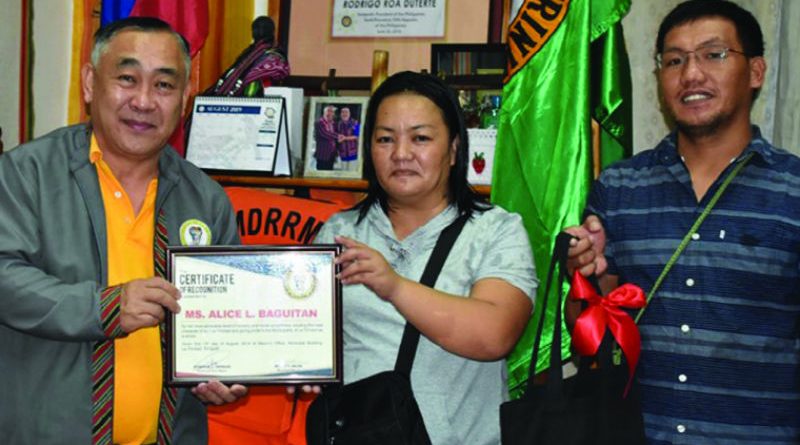 LA TRINIDAD, Benguet  – The municipal government recognized the honesty of a local vegetable trader for bringing honor and pride to the municipality by wilfully returning to its rightful owner a huge amount of money that was left inside a food chain in Laoag City, Ilocos Norte over a week ago.

Mayor Romeo K. Salda personally handed over to Alice Baguitan, 37, married, a vegetable trader who hails from Bauko, Mountain Province but is now residing in La Trinidad, Benguet, the plaque of appreciation from the local government in recognition of her good deed that is worthy of emulation considering that she was able to place the town in the map of the places home to honest individuals.

“We would like to give due recognition to Ms. Baguitan’s good deed because she brought honor and pride to our municipality after she was able to personally return to the rightful owner the huge amount of money that was left inside a food chain where she was also a customer that time,” Mayor Salda stressed.

Baguitan, a mother of two young children aged 12 and 13 who are studying in Bacnotan, La Union, narrated that she was eating inside a food chain in Laoag City when two female customers arrived and sat in the table near her. After finishing their food, the two females immediately left without noticing that they left behind a bag shaped like a lunch box that prompted her to take the same and look on what was its contents.

To her surprise, she saw numerous bundles of money inside the said bag which totalled more or less P2.7 million that prompted her to locate the owner of the same considering that she knew that the money will be used for very important matters.

“I was able to hear from the conversation of the two females that they will be proceeding to the bus terminal right after stint in the food chain that is why I immediately proceeded to the station to locate them. At first, I was not able to locate them but I tried my best to look for them to hand over the bag to them because I knew that they were also worried about having left the bag in one of the places that they dropped by,” Baguitan said.

She disclosed that she was able to meet one of the females in front of the comfort room where she came from with an obviously worried look. When she asked her if she was looking for something, she was obviously piqued based on her facial reactions.

Baguitan then narrated that she was seated near them inside the food chain and that they seem to have left something that is why she made an effort to locate them to return to them what was left because she knew that the money will be used for equally important things. The female then hugged her tight and cried while expressing her gratitude to the vegetable trader because of her good deed.

The 37-year old trader eventually learned that the money was the proceeds of the sale of their property which will be used to have a relative undergo expensive medical procedures.

The duo attempted to give her a reward for her good deed but she declined the offer considering that she knew that the money will be used for equally important things to save the life of an ailing person aside from the fact that she will be further blessed in other ways for being honest.

Earlier, Baguitan was also able to return to a Muslim trader some P750,000 placed inside a pouch that was left in a tricycle where she happened to be the next passenger in Laoag City.

Baguitan and her husband are natives of Banao, Bauko, Mountain Province but opted to reside in La Trinidad, Benguet considering that vegetable trading which is their source of livelihood is based in the vegetable trading post.

She studied for two years in the bible school based in Taneg, Mankayan, Benguet before working as a househelp in Metro Manila and other places.

Baguitan said that when people have a huge amount of money in their possession, it will surely be used for important things that is why when the same is left, it is incumbent upon those who are able to find it to locate the rightful owner so as not to add up to their problems.

“One will not have the feeling of guilt once he or she is able to return the rightful owner the valuables that were left behind so I encourage people to be honest as it is still the best virtue that should be passed to the present and future generations,” Baguitan added.

By HENT
HONESTY – La Trinidad Mayor Romeo K. Salda handed over to Alice Baguitan from Pico La Trinidad a plaque of appreciation because of her honesty. Photo by Joel C.