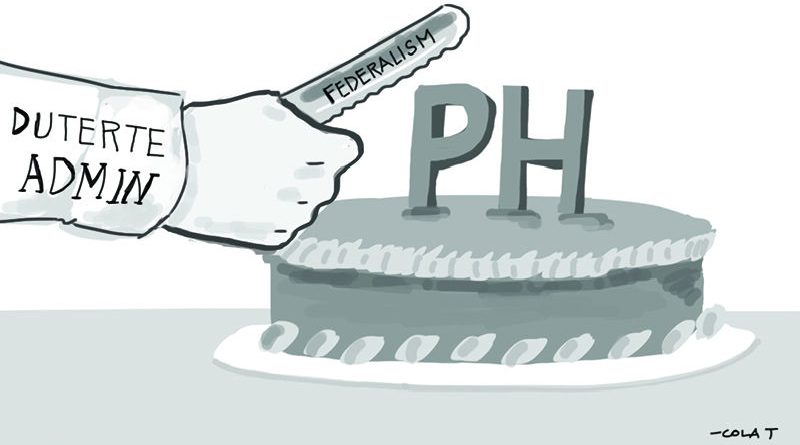 Federalism involves shared and residual powers between the federal government and the federal states, with the latter generating their own resources to meet the requirements of governance. Under the 1987 Constitution, we have a unitary form of government. To shift to a federal form of government, we must then change that provision in the Constitution. Based on existing constitutional provisions, there are three modes of amending the Constitution, to wit, the convening of both chambers of Congress as a constituent assembly, the creation of a Constitutional Convention or through peoples’ initiative. The shift to federal form of government has been time and again proposed by every administration but attempts to amend the fundamental law of the land has been met with stiff opposition by the people.

During the campaign period for the May 2016 general elections, President Rodrigo R. Duterte had been vocal about shifting the present unitary to federal form of government once elected into office. He was then overwhelmingly voted upon by the people as the country’s Chief Executive with a margin of over 6 million votes over his nearest rival. In his two State of the Nation Address (SONA), the President was emphatic about his desire to shift to a federal form of government to strike a balance in the development opportunities in the center and the rural areas by empowering local governments to have greater control of their resources and have substantial powers to govern.

In December 2016, the President issued an executive order for the creation of a Constitutional Commission that will serve as an advisory body to Congress on the proposed amendments to the Constitution to advance the government’s planned shift to federal form of government. After over a year, the President named 19 of the 25-member advisory body with 2 Cordillerans as part of the Charter review body. To date the body has yet to be completed and its members are still waiting for their marching orders from the President on how to undertake the requisites for the charter change initiative.

The House of Representatives already calendared as one of the priority measures to be deliberated this year the proposal for charter change by the first quarter of this year.

Further, the division of the country into federal states is a major issue and lawmakers will be horse-trading to suit their dynastic interests. Numerous proposals on how to divide the country into states are now pending before Congress and it will surely take time for the lawmakers to decide on which among the pending division proposals will be acceptable to the people. On the other hand, the people themselves are not too sure about what is this all about. Some people also, especially the indigenous peoples, are wary about Charter change because the recognition of their rights, particularly their right to their ancestral domain, may get lost. This will surely be a tragedy for them.

We have to also take note that federalism experts have come out with their studies that in order for federalism to succeed in the country, there should only be five federal states that will be created, particularly the federal states of Luzon, Visayas, Mindanao, National Capital Region (NCR), Bangsamoro, because it takes a federal state to have a conservative budget of P202 billion based on existing public infrastructure to survive.

No less than the President issued a statement that the Filipinos are not yet ready for federalism that is why even the present administration is doubtful where the planned shift to federal form will succeed in the end. Another negative revelation against the government’s quest for federalism is the fact that federalism advocates who are going around the Cordillera are allegedly making false promises and pretences with their doubtful credibility and integrity which turns off people against the federalism movement.

It is important in this juncture in time for indigenous peoples to be actively engaged in this Charter change and federalism discourses as we may be welcoming a Trojan horse that will undermine all the gains we have made on the recognition of our rights. There may be other ways of mending weaknesses of the law, but not necessarily to change the fundamental law of the land. It is always best to practice the precautionary principle when we do not actually know the long-term consequences of our actions. Be aware!