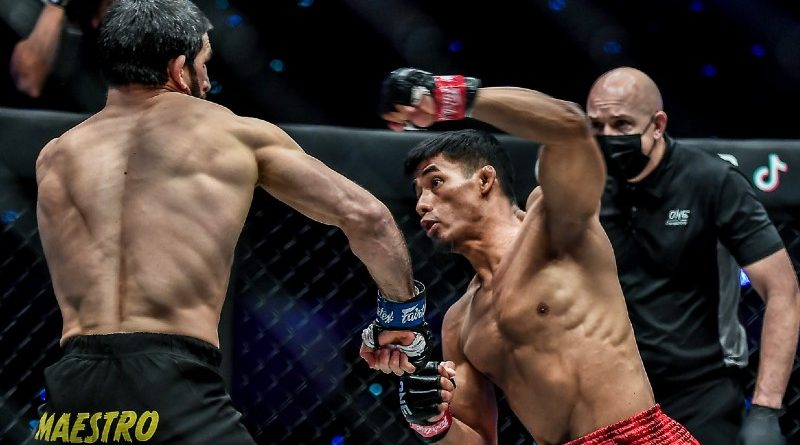 Team Lakay came up with an even 2-2 in their headlining of ONE championship’s year ending event. Stephen Loman and Jhanlo Mark Sangiao came up with impressive debut fights but Danny Kingad and Kevin Belingon faltered during ONE: WINTER WARRIORS II, a recorded event at the Singapore Indoor Stadium in early December and was aired across the world via tape delay on Friday, December 17, 2021.

Loman put on an electric performance in his ONE Championship debut, knocking out #3-ranked bantamweight contender Yusup Saadulaev to end the Russian’s three-fight winning streak.

Loman showed patience and composure in dealing with the dangerous grappler, as he peppered Saadulaev with fast punches from range. The end came when Loman connected on a left hook that sent his opponent crashing to the canvas 4:09 gone in the first round.

Sangiao was equally thrilling in his ONE Championship debut, submitting Paul Lumihi via rear-naked choke in the first round of their bantamweight contest.

The 19-year-old Sangiao, son of famous Team Lakay head coach Mark Sangiao, pressured Lumihi with strikes until an opportunity to take the fight to the ground presented itself. The young phenom then took Lumihi’s back and locked in the fight-ending submission, forcing the tap at 1:41 of the opening frame.

Meanwhile, second ranked flyweight Danny Kingad was dominated by #4-ranked flyweight contender and former ONE Flyweight World Champion Kairat Akhmetov, who turned in a spectacular performance across three rounds in the main event.

It was a fight years in the making, as the two talented flyweights finally met in the Circle after a number of failed attempts to put the bout together.

Akhmetov was relentless with his wrestling throughout the contest, consistently driving Kingad backward with powerful shots. On the ground, the Kazakhstani fighter controlled the action with technical precision.

While Kingad did have his moments, they were few and far between as Akhmetov asserted himself at every juncture. In the end, all three judges scored the bout in favor of “The Kazakh” to win by unanimous decision.

The tall and lanky South Korean attacked Belingon with a steady stream of punching combinations from the opening bell, while the Filipino star fired back with his patented spinning attacks.

A thunderous left hook to the body in the second frame crumpled Belingon instantly, and the former bantamweight king was unable to continue. The official finish came at the 0:52 mark of round two.

Former ONE Middleweight World Champion Vitaly Bigdash made a triumphant return to the Circle, finishing Fan Rong inside the distance after an impressive all-around showing. Bigdash was effective in nullifying Fan’s aggression, stopping the Chinese fighter’s advances with his impeccable grappling. In the third round, Bigdash foiled a takedown attempt from Fan before latching onto a guillotine choke to force the tap.

Undefeated Russian phenom Murad Ramazanov extended his winning streak to 11 with a comprehensive victory over former ONE Welterweight World Champion Zebaztian Kadestam. Ramazanov showcased his world-class wrestling skills, dominating Kadestam at every exchange. Kadestam tried his best to keep the fight standing, but to no avail, and Ramazanov cruised to a unanimous decision.