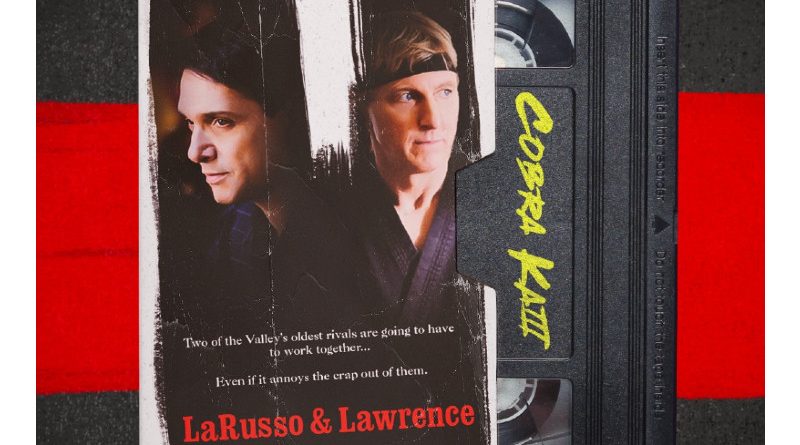 Lito “Thunder Kid” Adiwang is a fan of martial arts and after watching “Cobra Kai” during last year’s quarantine, he sees more of a Johnny Lawrence than Daniel LaRusso in himself.

For the young who might not have an idea who these are, Cobra kai is a spinoff of the 1980’s popular movie “Karate Kid”, the movies series that propelled Ralph Macchio and Pat Morita to superstardom among fans.

After watching the then trending series, Adiwang couldn’t help but share his thoughts considering he is a huge fan of the original “Karate Kid” franchise.

“The pride and honor of martial arts should be shared with the world. Martial arts has helped me achieve my dreams and see the world,” said Adiwang then. “I’m very happy that a show like Cobra Kai can spark interest in my sport. It’s not just about fighting. I learned at a very young age that martial arts was really a way of life for me.”

Johnny (William Zabka) is the villain of the original series, a bully to Daniel (Macchio). The two would eventually met in a karate tournament with Johnny representing the Cobra Kai dojo where he would lose to Daniel to a crane kick despite having used illegal tactics at his teacher’s prodding to injure Daniel.

The sequel is setup over 30 years after the first film. Season One showed Johnny a drunkard struggling to make a living, estranged from his son, and still battling depression.

He gets a chance to reset his life to a fresh start by accidentally meeting with student Miguel Diaz (Xolo Maridueña) and eventually teaching him Karate to defend himself against bullies, reopen the Cobra Kai dojo and reversing a ban to enter it to the same karate tournament he once participated in.

In contrast to his experience, his student wins the tournament by ruthlessly exploiting the injured of shoulder his opponent, who happens to be his estranged son, against his wishes.

Season Two showed Johnny going to a straighter path by addressing the dirty techniques and installing discipline to his students. He would find a love interest in the mother of Miguel, reconciles with his son, also reconciles with Kreese but fires him when he finds out he was still teaching their students the old ways.

It was an interesting and refreshing take on the classic story up to this point, showing things from a new perspective. Adiwang, like many, has enjoyed experiencing the story through Johnny’s eyes.

“I identify with Johnny mostly, because in the end, he made the choice to redeem himself. Everyone has good and bad sides, but we can always choose to use our talents for a better purpose,” said Adiwang.

“In the original movies, Daniel played the character of a bullied kid who learned Karate to defend himself. He eventually won the karate tournament, which was great but after watching some of Cobra Kai, I think I like Johnny’s character more. My belief is that, it’s not how you start things, but rather how you end things that really matters. It’s how you can use your greatness to impact others.”

The latest episodes, however, showed more challenges to Johnny as massive conflict between the two dojos’ students erupts which affects Johnny’s life and relationships severely.

A legal trouble by his missing son, her love interest breaking up with him, and Kreese regaining control of Cobra Kai that forces him out of the dojo, have driven a guilt-ridden Johnny to get intoxicated again.

In reality, Adiwang is the perfect embodiment of an elite martial artist. He is both extremely skilled and honorable, a legit martial artist with well-rounded skills to match his infectious smile and charisma.

Yet apart from being one of the most talented fighters in ONE Championship, currently climbing through the ranks one explosive finish after another, Adiwang also believes he showcases the pride and honor of martial arts with every performance.

More than that, Adiwang says martial arts has given him a gift that he wants to share with other people.

“In my own life, I’ve made it a point to show honor to my family and the people who care for me. Now that I’m a fighter, a martial arts instructor, I also want to share the true meaning of martial arts with others,” said Adiwang.

“I want to protect this tradition and use it in a good way, helping others by teaching them the true values of martial arts — that it’s a discipline to be learned and understood, which will then improve the quality of life.”

The ONE Warrior Series contract winner and rising ONE Championship strawweight star has once demonstrated his words to action by declaring he is not in favor of going up against co-Team Lakay star Joshua Pacio to get personal gain despite being legitimately one of the most explosive talents on the ONE roster and a ranked contender who can vie for Pacio’s belt.

Incidentally, Season 3 of Cabra Kai is currently up on Netflix.