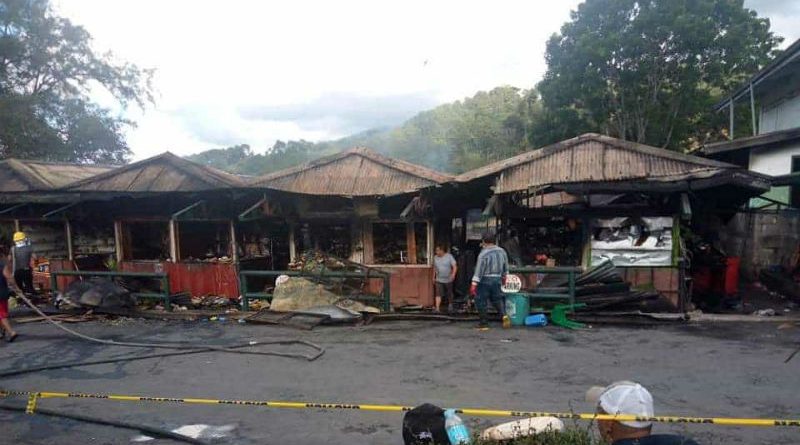 MANKAYAN, Benguet  – The municipal government announced that the Lepanto Consolidated Mining Company (LCMC) willingly provided the a relocation site for the sixty-five vendors displaced by the weekend fire that razed the public market within the company’s property.

Mayor Frenzel Ayong made a representation with the Lepanto officials and convinced them to allow the temporary use of its gymnasium and pelota court to serve as a relocation site for the displaced vendors to ensure their continued livelihood.

Earlier, a 2-hour fire razed to the ground the Lepanto market structure where the 65 vendors were doing business that prompted the affected vendors to call for assistance so they sustain their vending activities and earn a living for their families.

After the fire incident, Mayor Ayong immediately met with Lepanto officials to discuss any assistance both the municipal government and the company can provide to the displaced vendors.

The Municipal Chief Executive also claimed that he requested the municipal Social Welfare and Development Office to look into any assistance that could be provided by the municipal government while it will be coordinating with other kind-heated individuals and groups for similar assistance to help them recover from their losses.

Ayong expressed his gratitude to all who extended their assistance, in whatever form, in putting out the fire and aiding the displaced vendors and their families.

He emphasized that it is important the displaced vendors can continue their daily vending activities in the relocation site while efforts are being done to rebuild the market in the same place or in another site, depending on the decision of the company which has jurisdiction over it.

Last year, a building of the Lepanto National High School was also burned that also demonstrated the bayanihan spirit among concerned sectors bringing them together in putting out the fire and saving other structures of the secondary institution.

8       8SharesThis post has already been read 2780 times!The city identified some twelve priority investment areas that are expected to contribute in efforts