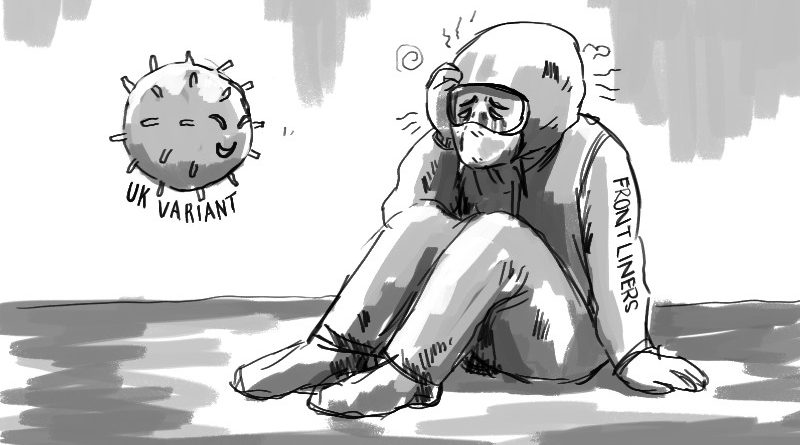 The Cordillera had been under modified general community quarantine over the past eight months because of continued prevalence of Corona Virus Disease (COVID) 2019, but Baguio City and Benguet have recently recorded high prevalence of the deadly virus. Supposedly, the region was on its way to be one of the areas that will be declared under new normal status effective February 1, 2021. However, such declaration is a virtual reversal to the recent decision of the inter-agency task force for the management of emerging infectious diseases placing the region under general community quarantine or notch lower from its current status. This is due to the surge in the number of cases in most areas, coupled with the emerging threat of the new variant, and the lack of discipline among people in complying with the prevailing basic health and safety protocols.

Truly, people are now realizing that COVID-19 in our midst is real as shown by the sudden surge in cases in Kalinga and Mountain Province over the past several weeks is indicative of complacency among us in our adherence to the prescribed health protocols. Concerned government agencies and local governments had been constantly reminding us on the need to comply with the established protocols such as the mandatory wearing of face masks, and face shields, the observance of physical distancing, and the practice of personal hygiene and sanitation which had been proven by health experts to be our most potent weapon to prevent us from contracting the dreaded illness that might compromise our health condition.

However, observers noted that some people who are now desperate on looking for income to for their sustenance seem to have forgotten to observe the protocols, while some have been seen loitering around without the necessary personal protective equipment, such as face masks and shields. To ensure the compliance of the people to the aforesaid protocols, local governments were mandated to enact ordinances to impose stiff penalties against violators but despite the presence of such measures, there are still a good number of individuals who have to be reminded by law enforcers to comply with the health and safety measures.

The search for jobs and other economic activities to sustain living costs is not a valid ground to violate the established and prescribed health and safety protocols. At the start, we had constantly been reminded that with the absence of medicines and vaccines to cure or make us immune from the virus, the best way for people to survive is to observe the minimum health and safety standards. During the initial stages of the implementation of the community quarantine regulations, people complied to such protocols. However, complacency reared its ugly head as the days passed amidst the loss of livelihoods and income. Some individuals became desperate as their survival looked grim. The clamor for jobs grown due to the heavy impact of the pandemic to people’s sources of livelihood. Some have become defiant and this has caused some of the recent surges in the number of cases around the region.

We have no one to blame in the downgrading of the community quarantine status of the region if not ourselves. We have repeatedly failed to comply with the simple prescribed health and safety protocols. What happened to our region should served as a hard-earned lesson for us.  We have to realize that the health authorities were right from the start when they continuously issued public advisories for us to adhere to health and safety protocols. The government might have done its part of the equation but we were not able to assume and execute our obligations.  The surges in the number of cases are not fiction. Now we have to contend with the new variant of the virus in an unexpected area of the region such as in Bontoc, Mountain Province and La Trinidad, Benguet.

The downgrading of the region’s community quarantine status should now serve as a wakeup call for us to reflect on our belief that we are okay even if we do not observe the minimum protocols. Do we want our region to be brought back to the such stricter modified enhanced community quarantine? We gained headway in our economic activities since the declaration of the Luzonwide lockdown in March but such gains should not serve as our ticket to even minimally violate the established health and safety protocols. Let us the use the lessons that we have learned to advance our efforts to recover from the pandemic. Let us not waste the sacrifices that we had made over the past ten months because it will further ruin our desire to recover and bring back the vibrance of our economy. Indeed, it is difficult to balance health and economy but what gain do we get if we get contact COVID-19?