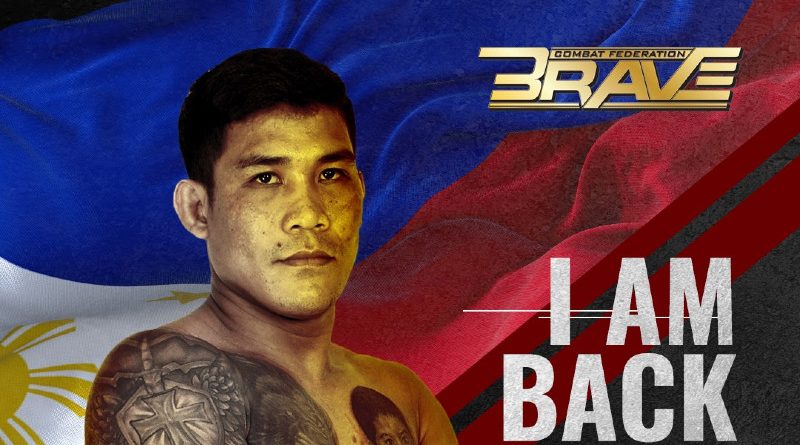 Jenel “The Demolition Man” Lausa knows his upcoming bout is absolutely essential for getting his professional mixed martial arts (MMA) career back on track.

The 32-year-old Concepcion, Iloilo native will be strapping on four-ounce gloves for the first time in nearly three years as he is set to square off with Afghanistan’s Rahmatullah Yousufzai in his promotional debut at BRAVE CF 47: ASIAN DOMINATION in Bahrain on March 11.

Lausa made headlines when he surprisingly announced his return to the sport this past February and signed an exclusive multi-fight contract with BRAVE Combat Federation.

Spending most of his time away from MMA inside the boxing ring, Lausa is determined to make up for lost time by marking himself as a contender in the promotion’s talent-filled flyweight division.

“I aim to win my debut fight and the next fights after that. I dream to continue winning and bounce back from the setbacks that I experienced,” he stated. “Being in the MMA world once again puts a big smile on my face. I am grateful for the opportunity that BRAVE CF has given me.”

It has been a tough stretch for Lausa, who has gone 1-3 since he last set foot inside the cage. Undeterred, the hard-hitting Filipino is staying positive and plans to use the lessons he learned in those defeats.

“I believe this my second chance to prove myself in the mixed martial arts industry. This is also a chance for me to substantiate that I have definitely learned from my shortcomings in my past MMA fights,” he said.

However, a difficult test awaits him in his first assignment under the organization’s banner. The man standing in his re-entry to the winner’s circle is Yousufzai, an undefeated prospect who owns a pristine 4-0 slate with two knockout wins.

The Afghan warrior left a lasting impression in his maiden BRAVE CF appearance last September, knocking out Abdulmanap Magomedov in 42 seconds. His statement-making victory over the Russian earned him the 2020 BRAVE CF Knockout of the Year award.

Lausa will need all the confidence he can muster against a hungry opponent in Yousufzai, who is targeting a huge boost in his own stock with a triumph against the Filipino.

Having done his homework on Yousufzai, “The Demolition Man” expects nothing less than an unrelenting grind from a guy who can spell trouble in the stand-up department like him.

“I have seen his fights and I have read articles about him. He is a good fighter,” Lausa mentioned. “We are both strikers, so he will probably strike with me. But at the same time, I don’t want to underestimate his ground game, so I am also preparing for that aspect.”

“With a winning streak like that, of course, I will have to double my efforts. It definitely motivates me,” he added.

While Lausa is hesitant to predict the outcome, he is confident in his abilities and will also keep a close eye on the ongoing Flyweight World Title Tournament.

“BRAVE CF has a remarkable roster of flyweights, and that excites me going into my first fight. I see a lot of potential and good matchups. But let’s take it one fight at a time. I am completely focused on doing whatever it takes to claim victory on March 11. It’s not going to be easy, but I am ready to give it my best,” he declared.

BRAVE CF 47: ASIAN DOMINATION is headlined by a Lightweight World Title eliminator between Filipino superstar Rolando Dy and Kyrgyzstan’s Abdisalam Kubanychbek. The event will be broadcasted live and for free on BRAVE CF TV.