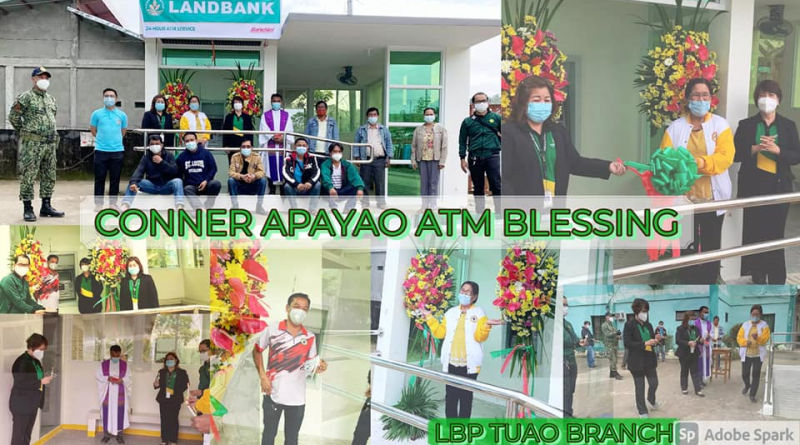 CONNER, Apayao—The yConnerians shall no longer worry much in accessing an Automated Teller Machine (ATM) for their cash withdrawals as another Landbank ATM was installed in Conner Town on January 23.

Mayor Martina Dangoy and Tuguegarao Capitol and Tuao, Cagayan Landbank Managers Beng Simeon and Maritess de Asis together with the Officials of Conner led the formal opening and blessing of the ATM, placed within the Municipal Hall area.

According to LBP Luna Apayao Branch Manager Michael Dela Cruz, the installation of ATM, which shall cater not only Conner but perhaps nearby town of Kabugao, has been realized through the collaboration of three LBP branches acting on the request of the Local Government Unit of Conner. The Tuao Branch, the nearest LBP Branch to Conner shall be servicing the ATM.

The processing of the request has been made early last year but due to COVID-19 pandemic which caused the imposition of Community Quarantines in the country, there was delay in its implementation.

Some of the residents expressed their gratitude to the officialdom of Conner as well as to the LBP Management.

One of the residents who is an OFW said, they will no longer travel far just to withdraw. “Wow maganda ito sa mga katulad kong OFW, mas malapit na, hindi na pupunta ng Tuguegarao or Tuao (Cagayan),” she stressed.

Conner next to Flora is the 5th town to be installed a Landbank ATM. Dela Cruz said the next on sight for another installation of ATM is Kabugao. BY GERRIAHZON S. SEBASTIAN

This post has already been read 1085 times!The city is not yet inclined to open inter-regional public transportation to avoid