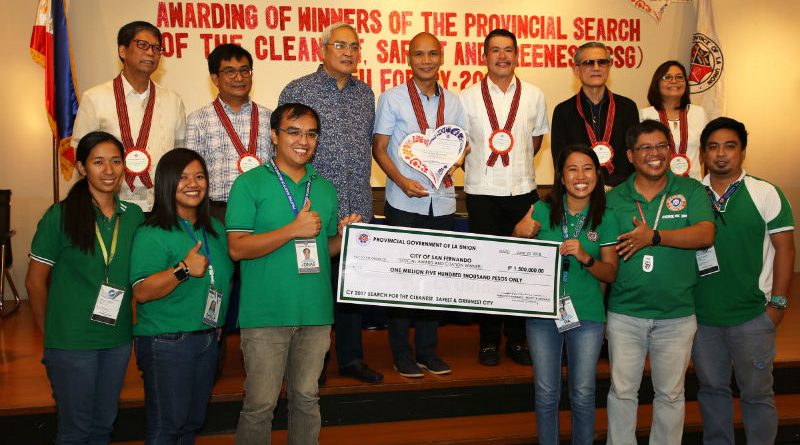 The awarding ceremony is inline with the environment month celebration themed “beat plastic pollution” conducted by the office of the provincial government – environment natural resources division.

The provincial government presented the recognition to the municipalities that garnered the highest scores after a validation of composite team in 2017, considering several criteria in general cleanliness of the municipality, urban space greening, support systems for environmental management, and protection and people’s participation.

Public safety and order was also considered during the visit which included indicators and measures on crime statistics and implementation of crime, drug and road hazard prevention programs.

For the 1st to 3rd class municipality category, Agoo town bagged the first place bringing home Php. 1.5M worth of projects, while Naguilian is second place with Php. 1M.  Bacnotan is third with Php. 500,000.

A special award and citation was given to the City of San Fernando, La Union which received by Mayor Hermenegildo Dong Gualberto together with City Environment Natural Resources Office staff worth Php 1.5M worth to be used for environment and agri-tourism related project fund.

Meanwhile, winners of the cleanest inland bodies of water are: first place – ‘Tapuakan’ River in Pugo town good for Php 1M worth of projects, trailed by second placer the ‘Tangadan’ falls in San Gabriel town with Php. 750,000, and Bagulin River in Bagulin town at third with Php. 500,000 worth.

The awarding was graced by Assistant Secretary Joselin Marcus E. Fragada, field operations-Luzon, who was the guest of honor and representative of DENR Secretary Roy A. Cimatu.