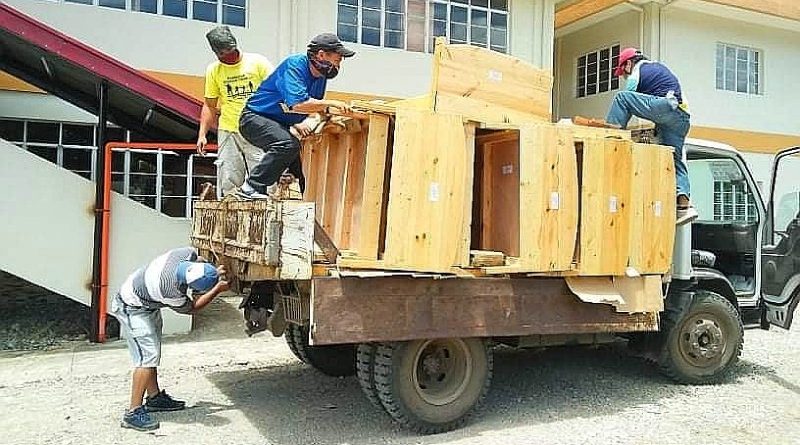 LA TRINIDAD, Benguet– The municipal government is on the final stages of putting in place its quarantine facilities in the different parts of the municipality in preparation for the surge in the number of Coronavirus Disease 2019 (COVID-19)  cases in the coming months.

Mayor Romeo K. Salda, in an interview aired over RPN-DZBS Baguio’s One for the Road afternoon program, said that the local government has several quarantine facilities that could accommodate some 19 COVID-19 patients at one time once the isolation rooms in the Benguet General Hospital (BeGH) will be filled up because of the rise in the number of cases coming from the different parts of the province.

He disclosed that the town’s quarantine facilities include a 6-room structure in Bektey, a 4-room facility within the local processing center and the 9-room senior citizens center which had already been recently inspected by health experts to ascertain its compliance to existing health and sanitation standards.

At present, La Trinidad has a total of 22 confirmed COVID cases that race back from the implementation of the Luzonwide enhanced community quarantine (ECQ) where 17 of them were able to recover from the deadly virus while 5 patients are now undergoing close medical supervision at the BeGH.

According to him, the local government has enough number of contact tracers who are working round the clock to conduct contact tracing on the close contacts of confirmed cases where the team is composed of trained law enforcers, health workers and personnel of the municipal disaster risk reduction and management office.

Further, Mayor Salda added that the 16 barangays already organized their respective barangay health emergency response teams (BHERTs) composed of up to 4 members each to closely monitor the compliance of residents to the established health and safety protocols and for returning Overseas Filipino Workers (OFWs) and locally stranded individuals to adhere to the prescribed 14-day home isolation before mingling with their family members and relatives.

The local chief executive claimed that adjustments had to be implemented after Benguet was downgraded from the modified general community quarantine (MGCQ) to GCQ where the local government had to tighten restrictions on the operation of establishments that had been allowed to operate and the strict implementation of the 24-hour curfew.

Salda emphasized that Sundays remain to be lockdown period in the municipality to prevent the possible transmission of the deadly virus that will result to a surge in the number of cases that could be beyond the control of the local government, thus, the same should be controlled with the cooperation of the people who should stay at home when they have nothing important to do outside their residences.

The municipal mayor stated that the local government will coordinate with concerned government agencies, state universities and colleges and the private sector for the identification of additional quarantine facilities and isolation centers in the locality to ensure the town’s readiness when there will be a significant increase in the number of COVID-19 patients from the different barangays.

By Hent
File photo: Personnel of the Benguet capitol fabricate beds in preparation for the opening of second Temporary Provincial Quarantine Facility. The provincial government of Benguet under Governor Melchor Diclas is preparing for the expected arrival of returning OFW’s and Locally Stranded individuals. Photo credits to Roger Benny, 07/05/20