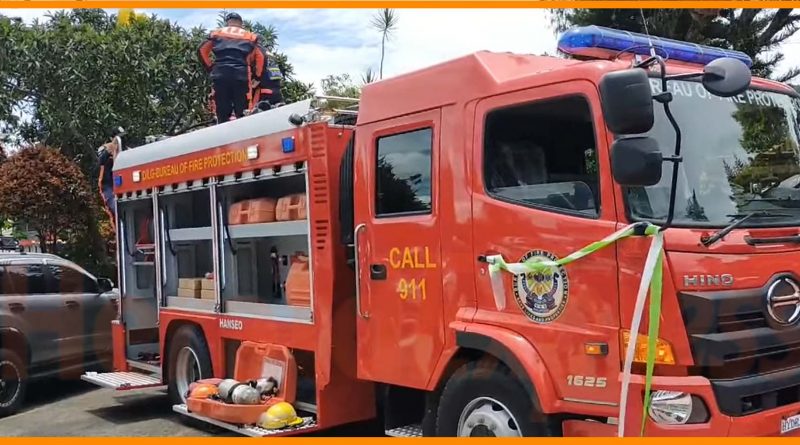 LA TRINIDAD, Benguet – The municipal government and the municipal fire station recently received from the Bureau of Fire Protection (BFP) a brand-new fire truck worth more than P11 million to help boost the firefighting efforts of responders in the municipality.

The timey turnover of the said fire truck was made possible through the efforts of Secretary Pascual and Anti-Crime and Terrorism through Community Involvement and Support (ACT-CIS) Party-list and Benguet Caretaker Congress Representative Eric Yap.

For his part, Mayor Salda expressed his gratitude to Secretary Pascual and Rep. Yap for facilitating the acquisition from the BFP central office of this town’s new fire truck that will definitely help in enhancing the firefighting capability of the municipal fire station to contain fire incidents.

However, Salda pointed out the urgent need for a mini pumper or penetrator fire truck that can maneuver through narrow barangay roads in the municipality for the immediate containment of fire incidents.

Sayapen disclosed that the brand new fire truck is fully automated with a centralized control system that will make it easier for firefighters to effectively and efficiently contain fire incidents.

He said the fire truck is part of the fleet procured by the BFP central office in line with the bureau’s modernization program to elevate the firefighting capability of firefighters to a higher level with the availability of state-of-the-art firefighting equipment.

According to him, the new fire truck will be in addition to the 4 existing serviceable fire trucks of the municipal fire station where the oldest fire truck that is still serviceable was the one purchased in 1979.

Aside from being fully automated, the town’s brand-new fire truck is also equipped with the necessary search and rescue equipment firefighters can use in the suppression of fire incidents.

Mayor Salda assured the concerned stakeholders of the municipal government’s continuing support to the provision of appropriate firefighting equipment to the municipal fire station provided there are available funds to procure these to enhance the firefighting capability among local firefighters and volunteer responders.

He advised residents to make sure that the electrical connections in their homes are properly in place aside from ensuring that matches are beyond the reach of children to prevent the occurrence of fire incidents.