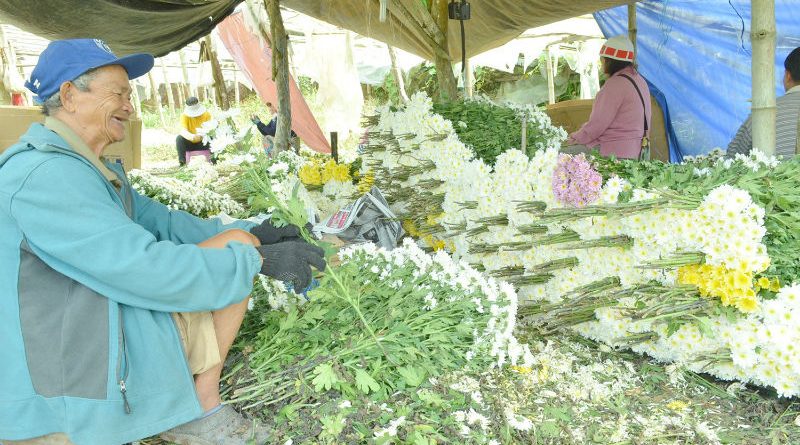 LA TRINIDAD, Benguet – The municipal government granted the request of cutflower growers to extend the ongoing sale of flowers at the parking area along Km. 5 until November 10, 2020 to allow them to recover from the serious negative effects of the prevailing community quarantine to the town’s lucrative cutflower industry.

Mayor Romeo K. Salda said the approval of the extension of the ongoing sale of cutflowers in the designated area is part of the contribution of the municipal government to allow the various sectors of the municipality to start the revival of their economic activities to earn income.

Earlier, the cutflower vendors and growers temporarily ceased their operations last Saturday in anticipation to the projected visit of two weather disturbances to the region over the weekend to avoid further losses.

Subsequently, the cutflower vendors and growers eventually resumed the selling of their produce and will be allowed to do so until November 10, 2020 with the hope people will be enticed to buy their produce.

Last October 15, 2020, the municipal government allowed the members of the La Trinidad Cutflower Growers Association (LATCUGA) to sell their produce  within the parking area at Km. 5 as part of the support of the municipal government to allow the heavily impacted sectors, like the cutflower growers, to market their flower produce supposedly in time for the All Saint’s Day and All Soul’s Day commemoration.

The cutflower vendors expressed optimism that with the visits to the private and public cemeteries expected to resume soonest, there will be a surge in the purchase flowers.

La Trinidad and several towns of Benguet are the major producers of quality cutflowers being sold not only in the municipality and nearby Baguio City, but also in Metro Manila and other parts of the country.

Mayor Salda claimed the municipal government and concerned government agencies are continuously working together to sustain support to the heavily impacted sectors in the municipality to allow people to have income.

Initially, the municipal government allocated some of its funds as financial assistance to the vulnerable and marginalized sectors of the locality, particularly businesses and vegetable and cutflower farmers.

Salda assured the concerned sectors that the municipal government is ready to extend assistance to the various sectors in need of help to allow them to start recovering from the effects of the ongoing health pandemic that started to affect almost all the people since March this year. By HENT

This post has already been read 2614 times!The city identified some twelve priority investment areas that are expected to contribute in efforts