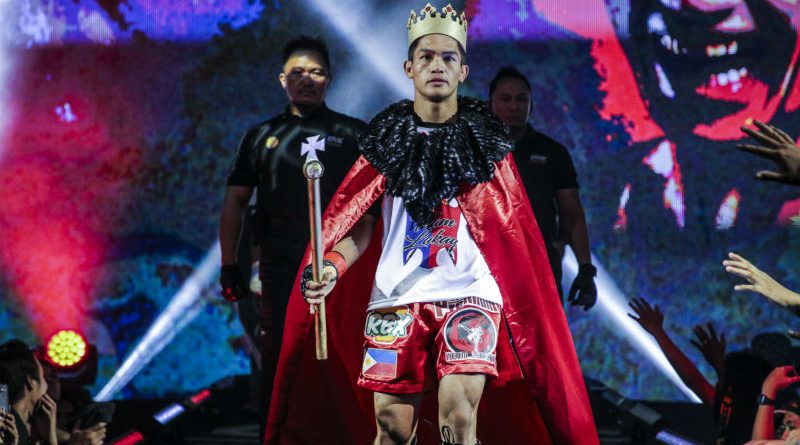 Danny “The King” Kingad will step inside the ONE cage once again as he tries to limit his losing streak to just one when he faces Fast-rising Malaysian competitor Gianni Subba at ONE: Visions of Victory on March 9, 2018 at Kuala Lumpur, Malaysia.

Kingad fell short in his ONE world title bid, tapping out to reigning flyweight king Adriano Moraes at Legends of the World last November 10, 2017. The King was forced to submit on a rear-naked choke by the Champion.

Before this loss, Kingad rack up seven straight wins, eight if his lone amateur fight is to be included. Three of these wins came inside a ONE cage.

In an article published by ONE Championship, Kingad related how poverty, losing a loved one and discovery of martial arts became a perfect blend for him in choosing mixed martial arts as a career.

According to the article, Kingad is a quiet, unassuming 22-year-old Filipino at first glance but all that changes the moment the flyweight steps inside the ONE Championship cage and the doors lock behind him, where, the tenacious Igorot warrior raises his head high, channels a rough childhood filled with sadness and despair, and uses it to defeat the man standing across from him.

Here is “How Danny Kingad Escaped Poverty And Delinquency” according to ONE:

Growing up in Baguio City as the youngest of five children, Kingad’s parents had a difficult time finding jobs and maintaining a steady income. Although he was raised in a very loving environment, he admits it was tough.

“I grew up with a poor family, and it certainly was not easy growing up,” recounts Kingad. “There was not always enough food when your family could not find work.”

Despite living in poverty, Kingad enjoyed the simple luxuries afforded to him by Mother Nature, such as running, swimming, and hanging out at the beach with friends. For an adolescent with little in life, it was as good as it gets.

However, tragedy soon struck. When he was just 8 years of age, his father passed away, and it still deeply affects the young Igorot.

“Losing my father was very difficult, because I cannot see him anymore,” Kingad says. “I get some of my motivation from the stories my mom tells me about my dad. My dad and I were very close when he was alive. I am very grateful that I still have my mom, and we are very close.”

After the untimely death, Kingad’s mother went to live with his sister. Meanwhile, Kingad moved in with his older brother and his family, which has been a blessing. In fact, his brother has been a constant source of inspiration, as he pushes “The King” to attend school, encourages him to go to the gym, and even helps him out financially to make sure he can make ends meet.

Though his world was flipped upside down as a child, it started to right itself during his teenage years.

When Kingad was a sophomore at Pinsao National High School, he was a party animal who smoked and drank too much. It was at this time he was introduced to wushu by his cousin, who was also a very big influence on his development. The deeper he got into the martial art, the more it affected his life in a positive way, as it taught him self-control.

“My cousin wanted me to go to varsity, so I started to train incessantly,” Kingad states. “He is the reason I spend so much time training. I did a lot of running as well, to go along with my training in wushu.

Kingad’s natural talent at wushu and his dedication to the art led him to the University Of The Cordilleras, where he was fully entrenched as a member of the university’s team. Under the tutelage of famed Filipino coach Mark Sangiao, he achieved a milestone in 2015 when he won the Regional Wushu Championship.

While attending university and training, he learned about ONE Championship from some of his fellow teammates and his head coach. In addition to running the school’s wushu team, Sangiao also heads the celebrated Team Lakay, home to current ONE Flyweight Interim World Champion Geje “Gravity” Eustaquio, former ONE Lightweight World Champion Eduard “Landslide” Folayang, and several top contenders in ONE Championship.

During sessions, Kingad occasionally trained in grappling to expand on his skill set, and after seeing some of his peers find success in the cage, he was motivated to follow in their footsteps.

“I used wushu to help me with my discipline and I am now training in other martial arts, because it is a big motivation for me,” said Kingad. “I saw some of the seniors at school competing, and they are champions now. I wanted to become a [world] champion too.”

Although he is only 22, Kingad has experienced the dark side of life and gained a tremendous amount of wisdom at such a young age.

The little boy who lived in poverty, lost his dad as a child, and partied excessively as a teenager has overcome a rough past, and now he is on the verge of achieving global glory.

Being surrounded by his family and teammates has given this future hero a source of inspiration that will undoubtedly carry him through the next phase of his life.

“The biggest hope I have for the future is to help my family,” an excited Kingad says. “I want to get closer to God and help my friends and family who are suffering. I also want to help my brother as a way to pay him back for the support he has given me.”