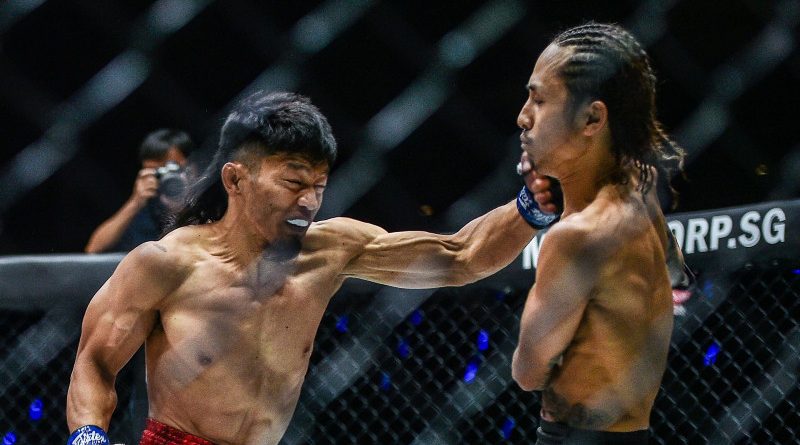 Team Lakay firecracker Lito “Thunder Kid” Adiwang’s stay in ONE Championship is rolling on healthy tracks. His maturity has been displayed at its highest level so far.

The decisions and steps he took showed what he is as a person and altered his career to new highs.

The series of good career moves started from his signing with the Philippines most winningest gym, dominating his opponents in the ONE:Warrior Series, doing the same early as a ONE’s main roster campaigner, and coming back from a loss during difficult circumstances.

Lately, he confirmed another unique trait when he affirmed his stance of not going for teammate Joshua Pacio’s belt. Very few would be satisfied of becoming a “gatekeeper” and “opponent tester” for a teammate at the expense of his own championship ambitions.

What was even baffling in his case are the facts that he is older than Pacio and he has a very legitimate shot at the reigning ONE strawweight champion.

He just made another declaration that will add more stability to his maintaining a long, successful career in combat sports.

“I have learned that I must not hesitate on my attacks and not to play too much in the fight. I have to be more serious and more focused on finishing my opponent,” Adiwang said.

Complacency and downplaying opponents are costly in combat sports. When a fighter is gifted with the skills and explosiveness like Adiwang and another teammate Kevin Belingon, finishing opponents whenever the opportunity arises will always be beneficial not only for their record but also for their health.

Admittedly, comebacks in sports are one of the most exciting moments for fans. It will be a highlight moment when a team who is down by 30 points in the third quarter chalks up a victory in basketball.

But comebacks in combat sports could be costly. A fighter who finishes the fight before going the full route will always have the benefit of absorbing less punishment from the opposition.

One of the most thrilling comeback stories in combat sports was the Jose Luis Castillo-Diego Corrales I boxing bout in 2005.

After trading power punches and combinations in the first nine rounds, Castillo was slightly ahead in many unofficial scorecards.

He then dropped Corrales twice in the 10th to seemingly secure the match and end further carnage between the two warriors. As if that wasn’t enough, he even got another break as Corrales was deducted a point from spitting his mouthpiece. The fight should have been over at this point.

Lo and behold, just moments after the fight resumed, a the battered Corrales connected a punch that dazed Castillo and rained combinations to his opponent against the ropes. The referee stepped in to hand him an unbelievable comeback and won that year’s best boxing bout.

Averting the comeback would have been greatly beneficial to Castillo. The perfectly timed hit he absorbed had enough power to do irreparable damage. In fact, it snapped Castillo’s head backwards while he was against the ropes.

Considering both men were brought to the hospital right after the fight, the punch probably brought scary feelings to Castillo’s loved ones comparable to that of Juan Manuel Marquez which dropped Manny Pacquiao, face first.

Fortunately, all four fighters in both bouts were eventually given a clean bill of health.

Adiwang’s acknowledgement of the benefits and dangers of ending a fight early shows how mature of a fighter he is. This trait should allow him to extend his already impressive MMA career longer and healthier.

The “Thunder Kid’s” supernova-like rise quickly established him as a potential superstar and saw him enter the official athlete rankings in ONE Championship.

After ranked 5th during the initial rankings, a loss to Japan’s Hiroba Minowa dropped him out of the top five. His defeat must have been doubly devastating as he was dealing with the terminal illness of his mother when the bout was held.

He made a second roundabout afterwards with a thunderous second-round knockout of Namiki Kawahara and an impressive unanimous decision triumph over “Wolf of the Grasslands” Hexigetu.

The twin victories installed him anew as the 5th ranked strawweight. And his impeccable mindset says his rise is not about to stop.

Next on his list is the cocky but dangerous Jarred “The Monkey God” Brooks, who he is scheduled to face during ONE: NEXTGEN III, a previously recorded event from the Singapore Indoor Stadium set for broadcast via tape delay on November 26. Already with filled with a good number of superstar-worthy fighters, Brooks loudly positioned himself as one of the most dangerous new signees in the promotion.

But for Adiwang, fighting the newcomer is another good break the ONE Super Series contract winner has long been waiting for. A victory here would do nothing but get his name further to a prime position.

Nevertheless, Adiwang isn’t not letting himself become overwhelmed by the golden opportunities thrown his way. He even hinted on giving his game further improvements, another trait usually attributed to champions.

The Benguet fighter has done exactly that, continuing to develop his strengths and weaknesses even before getting the long-awaited crack at Brooks.

Originally, the two were set to face off last April, until Adiwang tested positive for COVID-19 and forced Brooks’ promotional debut to be further delayed.

Seven months later, Adiwang is coming into this match as a better fighter, saying, “I think I’ve really improved since that first announcement of this fight against Brooks. I’m more pumped and a more confident version of the Thunder Kid.”

All he wants for this fight is to show that he’s there for good and deny “The Monkey God” the celebratory arrival he aspires to have.

“Brooks considers himself as the no. 1 in this division. To be fair, I think I’ve also fought a lot of high-caliber opponents in the strawweight division who may not be in the top five. So for me, defeating him should keep me in the top five,” Adiwang said.

8       8SharesThis post has already been read 2409 times!The city identified some twelve priority investment areas that are expected to contribute in efforts