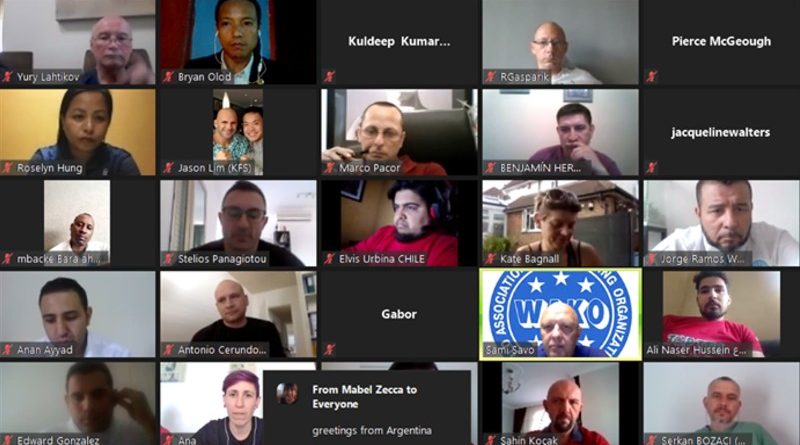 Existing rules of kickboxing competitions stays in effect this year while changes are expected to be implemented in 2021. This was the consensus made during the World Association of Kickboxing Organization (WAKO) International Federation Ring Sports Refereeing Seminar/ Webinar held last Sunday, July 12, 2020 where two technical officials from Benguet got the nod from their national sports organization to represent the Philippines.

Samahang Kickboxing ng Pilipinas (SKP) officials Bryan S. Olod of Sablan, and Noriel C. Acquisio of La Trinidad joined Roselyn of Cagayan De Oro City as participants from the Philippines to the event attended by more than 100 WAKO technical officials from different countries around the world.

The event was hosted by WAKO International Federation headed by its President, Roy Baker, of  London, England.

Updates on WAKO Technical Rules, especially in ring sports, and  WAKO programs during the COVID-19 pandemic were discussed during the event.

According to Olod, it was agreed that the existing rules of WAKO will still be used this year but there will be expected changes effective next year.

These expected changes will be applied in the upcoming international events next year like the Asian Indoor Martial Arts Games to be held in Thailand and the 2021 SEA Games 2021 to be held in Vietnam.

Acquisio is the current chairperson of mat sports of kickboxing in SKP, as well as a national technical official of SKP.

He is also the founder of MAX Fusion Martial Arts.

Hung is the current Technical Director of SKP and served as the Competition Manager of Kickboxing during the 2019 SEA Games.

The participation of the trio in the event endorsed by SKP President Senator Francis Tolentino and Secretary General Atty. Wharton Chan.

As of press time, Kickboxing is one of the 36 sports to be played in 2021 Vietnam SEA Games.