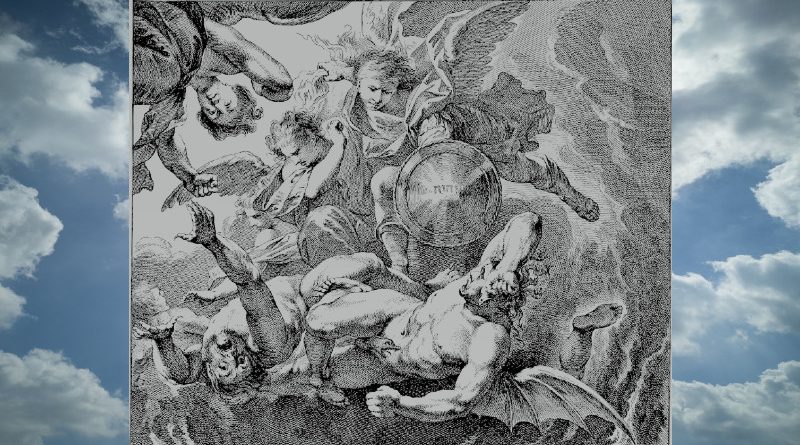 The bible also made its theme clear. While there are many tales narrated by the bible, one thing remains clear from start to finish: God is engages in a war versus Satan and He is encouraging man to get on His side so he will have everlasting life.

What the bible says about good going up against evil

The bible throughout its entirety undoubtedly says there are three major sets of characteristics in the bible: God and his angels, Satan and his demons, and earthly humans.

The group of Satan were originally on God’s side:

6And the angels who did not keep their positions of authority but abandoned their proper dwelling—these he has kept in darkness, bound with everlasting chains for judgment on the great Day. Jude 1:6, New International Version

Satan’s group instead fought with God and his angels:

Satan then involved humans in this war:

8Be sober, be vigilant; because your adversary the devil walks about like a roaring lion, seeking whom he may devour. 1 Peter 5:8, NKJV

This struggle was emphasized in The LORD’s model prayer: 9“This, then, is how you should pray:…. 13And lead us not into temptation, but deliver us from the evil one. Matthew 6:9,13, NIV

So yes, the bible tells there is good and evil and this has something to do with humans.

Here are other information the bible tells about this battle:

God is keeping an eye on both good and evil

3The eyes of the Lord are everywhere, keeping watch on the wicked and the good. Proverbs 15:3, NIV

14For God will bring every deed into judgment, including every hidden thing, whether it is good or evil. Ecclesiastes 12:14, NIV

Good and evil have nothing in common, they are exact opposites
Good and evil cannot be mistaken for each other
The divided kingdom
Lazarus and the Rich Man
Good can overcome Evil
Avoid divisive persons, be wise about good, and be innocent on evil

Other concepts about good and evil
The enemy are not humans, they’re powers and spirits in heavenly places

God and Jesus on good and evil

God dislikes all kinds of evil

15He who justifies the wicked, and he who condemns the just, Both of them alike are an abomination to the Lord. Proverbs 17:15, NKJV

Good and evil have nothing in common, they are exact opposites

Good and evil cannot be mistaken for each other

20Woe to those who call evil good, and good evil; Who put darkness for light, and light for darkness; Who put bitter for sweet, and sweet for bitter! Isaiah 5:20, NKJV

Jesus confirms the enmity between God and Satan by clearly stating His casting out of demons is done by the Spirit of God, not by Satan. He also said whoever is not with Him is against Him.

28But if it is by the Spirit of God that I drive out demons, then the kingdom of God has come upon you. 29“Or again, how can anyone enter a strong man’s house and carry off his possessions unless he first ties up the strong man? Then he can plunder his house. 30“Whoever is not with me is against me, and whoever does not gather with me scatters. Matthew 12:24-30, NIV

Lazarus and the Rich Man

[By some accounts, this particular story was labeled as a parable. On the contrary, Jesus identifies the beggar by name and refers to real men, Abraham and Moses, also by name, a clear deviation from the a usually fictitious, generic characteristic of a parable]

19“There was a rich man who was dressed in purple and fine linen and lived in luxury every day. 20At his gate was laid a beggar named Lazarus, covered with sores 21and longing to eat what fell from the rich man’s table. Even the dogs came and licked his sores.

22“The time came when the beggar died and the angels carried him to Abraham’s side. The rich man also died and was buried. 23In Hades, where he was in torment, he looked up and saw Abraham far away, with Lazarus by his side. 24So he called to him, ‘Father Abraham, have pity on me and send Lazarus to dip the tip of his finger in water and cool my tongue, because I am in agony in this fire.’

25“But Abraham replied, ‘Son, remember that in your lifetime you received your good things, while Lazarus received bad things, but now he is comforted here and you are in agony. 26And besides all this, between us and you a great chasm has been set in place, so that those who want to go from here to you cannot, nor can anyone cross over from there to us.’

27“He answered, ‘Then I beg you, father, send Lazarus to my family, 28for I have five brothers. Let him warn them, so that they will not also come to this place of torment.’

21Do not be overcome by evil, but overcome evil with good. Romans 12:21, NKJV

Avoid divisive persons, be wise about good, and be innocent on evil

17I urge you, brothers and sisters, to watch out for those who cause divisions and put obstacles in your way that are contrary to the teaching you have learned. Keep away from them. 18For such people are not serving our Lord Christ, but their own appetites. By smooth talk and flattery they deceive the minds of naive people. 19Everyone has heard about your obedience, so I rejoice because of you; but I want you to be wise about what is good, and innocent about what is evil. Romans 16:17-19, New International Version

Other concepts about good and evil

The enemy are not humans, they’re powers and spirits in heavenly places

17       17SharesThis post has already been read 763 times!Firstly, it is fervently wished Talk N Text’s Jeth Troy Rosario gets to