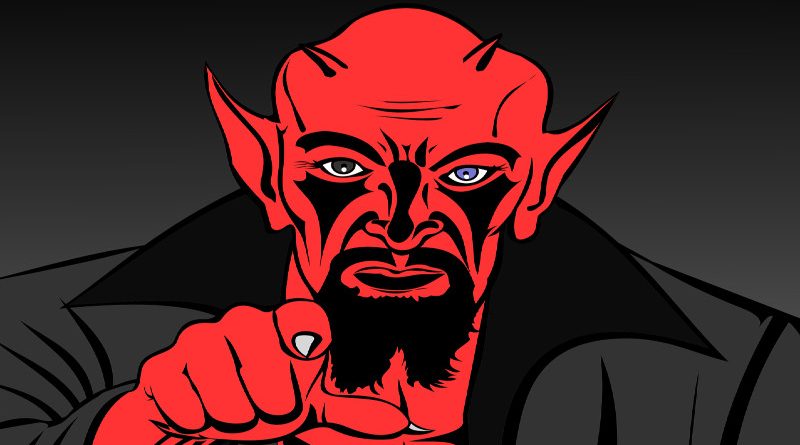 (Banner photo: an artist’s concept of the devil)

The bible also made its theme clear. While there are many tales narrated by the bible, one thing remains clear from start to finish: God is engaged in a war versus the devil.

What does the bible say about the devil

1. He believes there is one God and he fears Him
2. He is inferior to God
3. He is a murderer, a thief, a destroyer and a liar
4. He is an accuser
5. He is a crafty deceiver
6. He is looking for someone to destroy
7. He is sinful and wants to make many like him
8. He has control over the authority and splendor of the kingdoms of the earth
9. He demands worship which is dangerous for man to give in

He believes there is one God and he fears Him

19You believe that there is one God. You do well. Even the demons believe—and tremble! James 2:19, New King James Version

He is inferior to God

You are of God, little children, and have overcome them, because He who is in you is greater than he who is in the world. 1 John 4:4, NKJV

He is a murderer, a thief, a destroyer and a liar

42 Jesus said to them, “If God were your Father, you would love me, for I have come here from God. I have not come on my own; God sent me. 43 Why is my language not clear to you? Because you are unable to hear what I say. 44 You belong to your father, the devil, and you want to carry out your father’s desires. He was a murderer from the beginning, not holding to the truth, for there is no truth in him. When he lies, he speaks his native language, for he is a liar and the father of lies. John 8:42-44, New International Version

8Be sober, be vigilant; because your adversary the devil walks about like a roaring lion, seeking whom he may devour. 1 Peter 5:8 NKJV

He is an accuser

10Then I heard a loud voice saying in heaven, “Now salvation, and strength, and the kingdom of our God, and the power of His Christ have come, for the accuser of our brethren, who accused them before our God day and night, has been cast down. Revelation 12:10 New King James Version

He once accused Job of serving God only because he still has his health:

3Then the Lord said to Satan, “Have you considered my servant Job? There is no one on earth like him; he is blameless and upright, a man who fears God and shuns evil. And he still maintains his integrity, though you incited me against him to ruin him without any reason.”

4“Skin for skin!” Satan replied. “A man will give all he has for his own life. 5 But now stretch out your hand and strike his flesh and bones, and he will surely curse you to your face.” Job 2:3-4, NIV

He also did it to Joshua:

1Then he showed me Joshua the high priest standing before the angel of the Lord, and Satan standing at his right side to accuse him. 2The Lord said to Satan, “The Lord rebuke you, Satan! The Lord, who has chosen Jerusalem, rebuke you! Is not this man a burning stick snatched from the fire?”  Zechariah 3:1-2, NIV

He is a crafty deceiver

3But I am afraid that just as Eve was deceived by the serpent’s cunning, your minds may somehow be led astray from your sincere and pure devotion to Christ. 2 Corinthians 11:3 NIV

1Now the serpent was more crafty than any of the wild animals the LORD God had made. He said to the woman, “Did God really say, ‘You must not eat from any tree in the garden’?” 2The woman said to the serpent, “We may eat fruit from the trees in the garden, 3but God did say, ‘You must not eat fruit from the tree that is in the middle of the garden, and you must not touch it, or you will die.’ ” 4“You will not certainly die,” the serpent said to the woman. 5“For God knows that when you eat from it your eyes will be opened, and you will be like God, knowing good and evil.”  Genesis 3:1-5, NIV

He is looking for someone to destroy

8Be alert and of sober mind. Your enemy the devil prowls around like a roaring lion looking for someone to devour. 1 Peter 5:8, NIV

He is sinful and wants to make many like him

8The one who does what is sinful is of the devil, because the devil has been sinning from the beginning. The reason the Son of God appeared was to destroy the devil’s work. 1 John 3:8, NIV

23But He turned and said to Peter, “Get behind Me, Satan! You are an offense to Me, for you are not mindful of the things of God, but the things of men.” Matthew 16:23, NKJV

12“How you are fallen from heaven, O Day Star, son of Dawn! How you are cut down to the ground, you who laid the nations low!  13You said in your heart, ‘I will ascend to heaven; above the stars of God I will set my throne on high; I will sit on the mount of assembly in the far reaches of the north; 14I will ascend above the heights of the clouds; I will make myself like the Most High.’

15But you are brought down to Sheol, to the far reaches of the pit. Isaiah 14:12-15, English Standard Version

1Jesus, full of the Holy Spirit, returned from the Jordan and was led by the Spirit in the desert, 2where for forty days he was tempted by the devil. He ate nothing during those days, and at the end of them he was hungry. 5The devil led him up to a high place and showed him in an instant all the kingdoms of the world. 6And he said to him, “I will give you all their authority and splendor, for it has been given to me, and I can give it to anyone I want to. 7So if you worship me, it will all be yours.” Luke 4:1-2, 5-7

We know that we are of God, and the whole world lies under the sway of the wicked one. 1 John 5:19, NKJV

He demands worship which is dangerous for man to give in

8Again, the devil took Him up on an exceedingly high mountain, and showed Him all the kingdoms of the world and their glory. 9And he said to Him, “All these things I will give You if You will fall down and worship me.”

10Then Jesus said to him, “Away with you, Satan! For it is written, ‘You shall worship the Lord your God, and Him only you shall serve.’ ” 11Then the devil left Him, and behold, angels came and ministered to Him. Matthew 4:8-11, NKJV