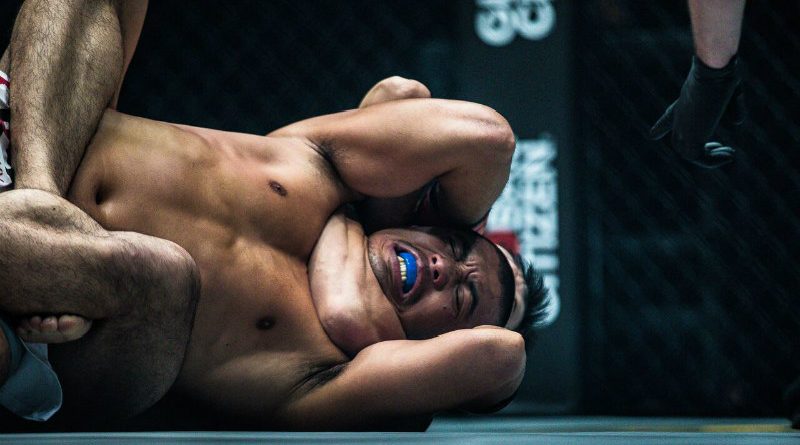 Jakarta, Indonesia – Eric The Natural” Kelly and Rome “The Rebel” Trinidad suffered abbreviated losses due to choke holds on the night Yoshitaka Naito of Japan scored a close split decision victory over Alex Silva of Brazil to capture the ONE Strawweight World Championship for the second time in his career.

Kelly fell victim to a rear-naked choke in the first round against Japanese Tetsuya Yamada in a catchweight contest.

Kelly traded strikes with Yamada to begin the match the patient Yamada waited for the perfect time to take his opponent to the ground and successfully took the fight below.

Once on the mat, Yamada quickly took Kelly’s back and locked in the rear naked choke to force the tap.

Trinidad, on the other hand, fell victim to a quillotine choke in round one from Indonesian female martial arts star Priscilla Hertati Lumban Gaol

After a brief exchange of strikes at the center of the mat, Gaol grabbed a hold of Trinidad’s neck in a standing guillotine.

As Trinidad tried to fend off the submission, action transitioned to the mat with Gaol still holding on to Trinidad’s neck and the tap came shortly after to eneable Gaol to continued her winning ways, taking her third straight victory in the ONE Championship cage.

With both men flaunting their delicate expertise on the mat, it was a technical grappling display as Naito and Silva battled for leverage. Naito showcased his overwhelming wrestling skills to consistently bring Silva down to the ground, controlling the action on the canvas.

Silva defended well against Naito’s attacks by resorting to his world-class Brazilian jiu-jitsu pedigree, but it was not enough to earn him the win as his Japanese foe’s grappling proved too much to overcome.

With the drive to recapture the gold that he lost to Silva last December, Naito punctuated the final round in dominant position to emerge the victor on two of the three judges’ scorecards, earning him the split decision win.

In the co-main event of the evening, local martial arts superstar Stefer Rahardian of Indonesia sent the crowd into a rapturous chorus of cheers with a spectacular performance, clinching his ninth straight victory with a submission finish of Himanshu Kaushik of India to remain undefeated.

After trading strikes with Kaushik to begin the bout, Rahardian shot in for the takedown, bringing his opponent to the canvas. On the mat, Rahardian quickly took the back and secured the rear naked choke to seal the deal.

From the first round to the last, the two middleweights employed efficient strategies. Ataides utilized his speed and power to connect on a handful of thudding strikes on Bigdash, who responded with counterpunches and kept the action standing.

After going back-and-forth in the striking department, Ataides was able to connect on a superman punch, sending Bigdash crashing to the canvas. On the mat, Ataides relentlessly poured down harrowing blows to secure the finish and claim the GoDaddy Knockout of the Night award.

Making his ONE Super Series debut, Lithuania’s Sergej Maslobojev authored a stellar performance to the delight of the crowd by routing Croatian foe Antonio Plazibat in their highly-anticipated rematch.

Although Plazibat sought redemption of the highest order and proved that he was a much different kickboxer than when they first met two years ago,

Maslobojev showcased his trademark power, catching his opponent with powerful hooks while blasting his counterpart with thunderous high kicks. Maslobojev closed out the final round of the match on a strong note, unleashing a volley of punches that steered him to a unanimous decision win.

A gruelling featherweight showdown between Sor Sey of Cambodia and Victorio Senduk of Indonesia transpired inside the ONE Championship cage.

Neither of the two would give each other any quarter for three whole rounds as both men traded their best offense all throughout the contest.

However, Sor Sey was able to pull away in the third round, staggering Senduk with a series of solid overhand rights before dragging his foe to the canvas for a chain of ground-and-pound.

In the end, Sor Sey’s gallant effort was rewarded by the three judges at cageside with a unanimous decision victory.

In a ONE Super Series bout, hard-hitter Ognjen Topic of Serbia emerged triumphant against Stergos Mikkios of Greece via unanimous decision in a three-round Muay Thai clash.

Featuring plenty of action and excitement, both men traded their best shots from bell to bell.

However, it was Topic who showcased superior technique, plastering his Greek opponent with crisp elbow strikes and lashing kicks to the body. All three judges ruled the bout in favor of Topic.

Singapore’s Radeem Rahman made a successful return to the ONE Championship cage after a long three-year absence, making quick work of opponent Tang De Pan of China.

Tang began the bout aggressively, looking to put together combinations, but Rahman’s superior grappling took precedence. After Rahman took Tang to the mat and secured the back, the Singaporean locked in the rear naked choke that forced the tap.

Siregar was relentless with his takedowns, slamming Mardian to the ground on multiple occasions. On the mat, Siregar overwhelmed Mardian from start to finish, clinching the win with a rear naked choke barely four minutes into the contest.

Indonesian strawweights Riski “King Kong” Umar and Doan Birawa kicked off ONE: GRIT AND GLORY with a spirited exchange of strikes to the delight of the packed Jakarta Convention Center crowd.

After an intense first round which saw both athletes have their moments, Umar took advantage of an exhausted Birawa in the second round, forcing the tap from a deep rear-naked choke.

Official results for ONE: GRIT AND GLORY