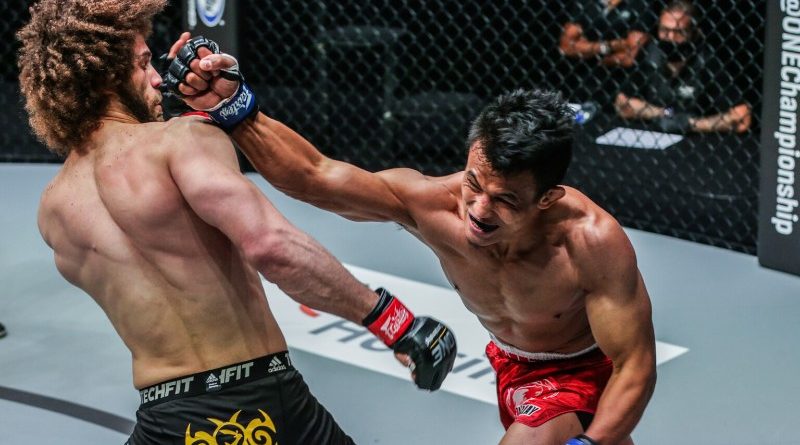 Edward “The Ferocious” Kelly survived a number of scary moments to outlast Ahmed “The Prince” Faress in their featherweight MMA bout during  ONE: FULL BLAST, aired on May 28, and gave his opponent a dubious record in his 20th professional bout.

While it wasn’t the start to finish dominant performance as planned, Kelly still showed he has much left in the tank with his display and reliance on several techniques and strategies. He depended heavily on grappling, ground and pound, fists and leg kicks to counter the much-heralded Egyptian in their see-saw battle to put an end to Faress’ 19-bout streak of winning or losing his matches either by knockout or submission.

The two combatants got into the back and forth action right in the opening round. Kelly got tagged early with a right hook that send him crashing to the mat. He, however, recovered nicely with a leg kick and a takedown. Faress quickly reverses it to a triangle submission but Kelly escapes to take control.

The round ended with Kelly inadvertently connecting a kick to the groin, then avoiding a flying knee and countered two hooks when action resumed.

Kelly started the second by dishing crisp kicks and countering crosses until an opportunity showed midway through the round. “The Ferocious” caught a Faress head kick and converted it to a slam which, ironically, almost became a threat as he was quickly locked in another but deeper triangle choke.

The Team Lakay veteran, however, managed to survive the minute and a half ordeal by tucking his head close, softening his opponent’s hold with some body shots, and eventually regaining top control with a half guard. He then dominate from top position, raining elbows and landing punches to the side of the body. He retained his half guard position as the bell sounded to end the round.

Kelly ventured into the final frame trying to pick his spots against an unusually stationary Faress. Sensing that his rival’s legs looked worn out after absorbing his low kicks, coupled the failed triangle attempts, Kelly continued firing his fists to the body and low kicks that kept on hounding his opponent’s legs while moving back just as Faress loaded up his right hand.

That simmered down the action although Kelly seemed to now play the intelligent game by mixing up his attack with side kicks and some sprinkle of body shots and remain the more active fighter in the Circle.

A desperate Faress once again tried to deliver the winning hit, a surprising flying knee, but just like in the first round, Kelly was ready for it and countered by landing two more body shots as time expired.

Kelly might have to rethink about his tentativeness of not going after a visibly spent opponent in the third round in future bouts but the strategy worked this night as he got the nod of two of the judges for the slimmest of winning margins in MMA.

The hard-earned win improved his win-loss card to 13-8. He snapped a two-bout losing skid, recording his first win since scoring a technical knockout victory over Sung Jong Lee way back in April 2019.