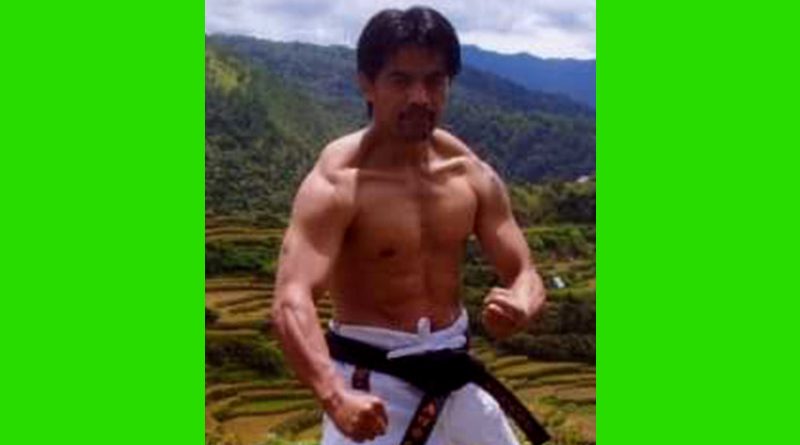 But this Santa is only 5’4”. He has no “beer” belly but a well-toned physique that could be the envy of any 20-year old. He is a Filipino, particularly an Igorot from Maligcong, Bontoc, Mountain Province.

Julian Che-es has made it a point to come home every December and share his good fortune with his countrymen.  Though people from his hometown would be his prime beneficiaries, he also makes it a point that he spreads the “sunshine” to other people from the Philippines.

After typhoon Yolanda struck and devastated Tacloban, Leyte, Che-es flew there and gave P1 million in donations and another P100,000 to Capiz.

“They thought I was a priest or from the UNICEF (United Nations International Children Emergency Fund) and were amazed when I told them that I am a karate practitioner,” said Che-es

“They could not believe that I am a karate instructor,” he added.

His JPC – Shoshin Foundation Germany is a non-profit and non-political organization meant solely for the Philippines and he has been doing philanthropy works for more than a decade now.

In establishing the foundation in 2004, Che-es, took this as a mission: “To strengthen the muscle of your heart, the best exercise is lifting someone’s else’s Spirit whenever you can.”

“I had been doing some sharing in the past, I have done it in Manila where I gave to street children in Quiapo and Ermita,” he said.

He has helped the late Ramon Dacawi in providing dialysis for indigent people.  In one instance, said Rosa Moresto, Che-es provided funds for the dialysis of not several persons but a score when Dacawi asked him for help. He later fed a number of people at the request of the late journalist, Moresto’s boss at the Philippine Information Office – Baguio.

“When he was nominated as one of the outstanding citizens of Baguio in 2004, it was disappointing that a person protested his inclusion. Later that person was found to have done such out of personal reasons. Sayang,” Moresto recalled.

He was, however, given a key to the city when he came back home in December that year.

Before the end of the year 2020, Che-es travelled to his hometown for his gift giving activities. Then he got stuck when he was asked to undergo a 14-day quarantine. Bontoc was a Covid-19 hotspot at the start of the year.

“I had to undergo a 14-day quarantine before I was allowed to come home,” he told this writer who interviewed him on January 28, a few days after his arrival.

“My younger brother, Gideon, a policeman, scolded me,” he said with a laugh.

What made Che-es establish a foundation to help those less in life is the fact that he is now a karate master of the higher level.

When Che-es reached the top echelon of his martial arts, he was reminded of his old master’s (Kunio Sasaki) teachings that karate is life.

“That as you grow older, your direction shifts from physical to mental and then spiritual,” he said.

“I am in this stage of life when I now concentrate on my spirituality. Meditate as often I could,” said the 60-year old sixth dan black belt.

“You see, I am also very lucky. My teaching give me so much and I know many in Germany who help me out,” he said.

The Baguio Colleges Foundation alumni wanted to become a soldier as young kid and enlisted with the army at 17 and was stationed in Gamu, Isabela.

When the armed conflict escalated in 1983 in Mindanao, he wanted to be deployed there, but then his mother stopped him afraid that he might come home in a coffin.

Instead, he enrolled at BCF where he joined the Reserved Officer Training Course which was his detour to officership with the military.

“Thru ROTC, I was able to attain my second lieutenant rank,” he said.

In 1982, he went to Manila and applied as a karate instructor. Che-es was into karate as an elementary student in Mankayan, Benguet.

“I was six or seven when I enrolled in Lepanto under the Shotokan (discipline) and under the tutelage of Dennis Paduka,” he recalled.

And when he came to La Trinidad in 1977, he enrolled at the YMCA, where he finally met Sasaki and the Japanese master’s top students including Jun Bawingan and Edgar Kapawen.

In 1983, he was lucky to get a Visa for Germany and a karate instructor’s job in Wurtzburg, Bavaria. In 1985, he decided to settle in Germany and has since then recognized as one of the country’s top instructors.

In Germany he won six European titles and went on the win three world crowns – in 1993 in Saar Brocken in Germany near the French border, the 1996 edition in Gardamo, Italy and at 49 years old, his final title in Florida.

In 2014, Germany’s chief instructor and recognized master in Europe, the ninth dan black belt Hideo Oichi recommended for his elevation to sixth dan, the first Filipino of Igorot blood in Asia, outside of Japan.

In 2019, Oichi again recognized his skills and had him named as the fifth dignified instructors in Germany, the first foreigner, first Igorot and the youngest at 59. The youngest before he came in was 61, while the others are 70 years old and above, while the oldest was 81 years old.

“I did my best and wow,” he said referring to the good life he has now that he now shares with those less in life in his home country.

Che-es has been in the Philippines for three months now, the longest stay here with gyms back in Germany still closed.

“Supposedly, I had to start my lectures on Friday, January 29, in Swtizerland, but then what can we do, all had been cancelled,” he added.

So he spends more time now in Maligcong, where he explores its mountains and the gift giving continues.

“Thanks to my supporters, I can still provide some help to those in need,” he added. Pigeon Lobien