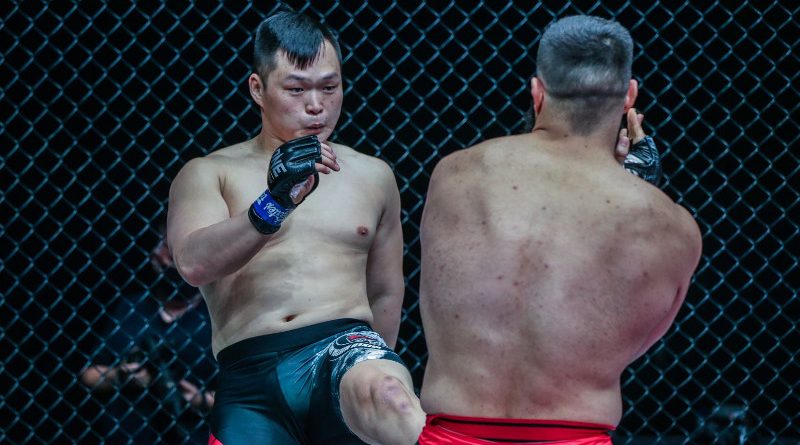 The largest global sports media property in Asian history, ONE Championship™ (ONE), returned Friday with ONE: FISTS OF FURY II. The explosive card featured five mixed martial arts fights, one Muay Thai bout, and a plethora of exciting finishes.

Aliakbari was aggressive early, stalking Kang along the Circle Wall. The heavy-handed Iranian then hurt Kang with a pair of monstrous right hands, which created damage around the left eye. As Aliakbari pressed forward, however, the South Korean avoided a strike and connected with a short left hook to the jaw, which dropped the Iranian and instantly finished the fight.

In the co-main event, undefeated Russian powerhouse Anatoly “Spartak” Malykhin utilized his superior wrestling to control Alexandre “Bebezao” Machado on the mat and overwhelm him en route to a technical knockout victory. Malykhin wasted no time in the opening moments of the contest, closing the distance and taking Machado down. On the ground, Malykhin worked to secure the mounted crucifix position, where he unloaded his ground-and-pound to complete the finish.

Featherweight phenom Tang Kai made quick work of former Shooto Pan Pacific Champion Ryogo “Kaitai” Takahashi, stunning the Japanese veteran in the first round to earn the knockout win. After taking a moment to size up his opponent, Tang turned up the pressure and connected on a left hook that dropped Takahashi to his knees. Sensing his opponent was hurt, Tang sealed the deal with a volley of punches that forced the referee to stop the contest.

Japanese star Yoshiki Nakahara notched a quick knockout against previously undefeated Ruslan “Snow Leopard” Emilbek Uulu, unleashing a thunderous right hook on his opponent’s jaw that ended matters in the first round. Uulu tried to use his length and reach advantage to keep Nakahara on the outside in the early going. But once the action hit close quarters, Nakahara had no trouble finding his mark and sending his opponent crashing to the canvas.

Former ONE World Title challenger Han Zi Hao overcame a spirited effort from game opponent Adam Noi in a ONE Super Series Muay Thai contest. Han was aggressive throughout the bout, taking the fight to his opponent and pushing the pace. Noi, on the other hand, showcased his complete arsenal of counter-strikes, featuring accurate kicks and punches on the inside. In the end, all three judges scored the bout in favor of Han to win by unanimous decision after three hard-fought rounds.

Hard-hitting bantamweight Mark “Tyson” Fairtex Abelardo scored an emphatic knockout victory over Emilio “The Honey Badger” Urrutia in the evening’s opening bout. Abelardo kept Urrutia on the back foot in the first round, unloading a series of punches and elbows on the inside that had “The Honey Badger” hurt against the Circle Wall. Abelardo closed the show in the second round, landing a downward elbow strike that separated Urrutia from his senses.

Next, ONE Championship returns with ONE: FISTS OF FURY III, a previously recorded event scheduled for broadcast on Friday, 19 March. In the main event, ONE Lightweight Kickboxing World Champion Regian “The Immortal” Eersel will defend his throne against hard-hitting #2-ranked contender Mustapha “Dynamite” Haida. In the co-main event, ONE Atomweight Kickboxing World Champion Janet “JT” Todd will begin her quest for a second belt by taking on #4-ranked Alma Juniku in Muay Thai. Other matchups on the stacked card include a thrilling clash between former ONE Strawweight World Champion Alex “Little Rock” Silva and Shooto Champion Hiroba Minowa. For more information, please visit the official ONE: FISTS OF FURY III Event Page.

Official Results for ONE: FISTS OF FURY II