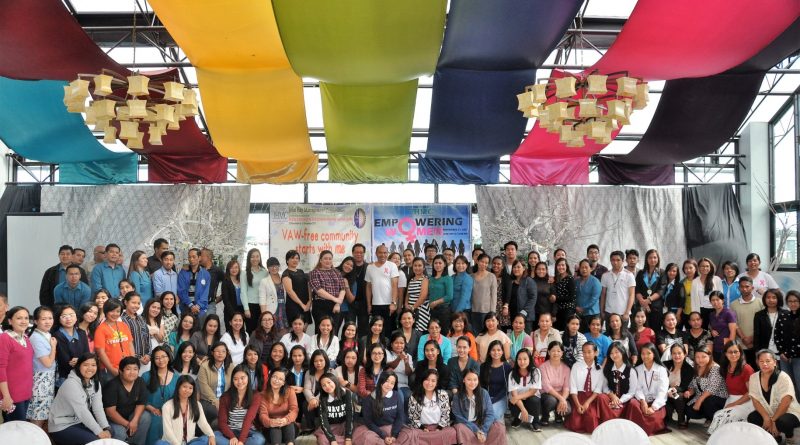 BAGUIO CITY  – John Hay Management Corporation (JHMC) wraps-up its Gender and Development activity for 2017 with a seminar for women empowerment and VAW-FREE Community at the Fortune Restaurant last November 27, 2017.

Councilors, Leah Fariñas, Elaine Sembrano and Ma. Mylen Victoria Yaranon of the Baguio City Council shared their inspirational messages discussing what embodies an empowered woman.  Councilor Sembrano, in her speech, recognizes the power of women to use their God-given gifts or circumstances to help the economy. She says, an empowered woman is one who is capable of doing just anything.

On the other hand, Councilor Fariñas recounts the first three women who against all odds remained strong and unshakable by the wrath of a dictator. At present, these three women symbolizes courage and power to stand on one’s right. In the end, she states that an empowered woman is one who is able to stand-up, speak-up and show-up for something.

For Councilor Yaranon, the capacity of women to empower and influence her fellow women is significant.  With the recognition of the City as a UNESCO creative city, the Baguio City Government empowers women through various livelihood programs.

In between cues, the attendees were entertained by a budding solo artist, Ms. Gayle Versoza Torralba, who was once a contestant from a famous television network show.

Dir. Helen Tibaldo of the Philippine Information Agency (PIA), through her representative, Redjie Cawis, emphasized that, “Women empowerment is respecting the dignity and equality of men and women and the fundamental freedoms in the political, economic, social, cultural, and any other field.  Recognizing that, women’s rights are human rights.”

Further, he presented the gender equality guide for media as mandated under various prevailing laws including the 1987 Constitution.  In here, women will be given more voice to express their opinion and that their participation in various public discussion will be ensured.

The JHMC continues to fulfil its mandate as a responsible GOCC.  At the outset, it aspires to be one of the top performers when it comes to gender and development programs.

Jane Theresa G. Tabalingcos, GAD Focal Point System Head and JHMC Vice President and Chief Operating Officer, emphasized that JHMC believes that it is important to equip ourselves with awareness and knowledge on the issues of social and cultural norms so that we’ll be able to create and provide opportunities for reforms on women’s empowerment and gender equality.

A comprehensive discussion of RA 9262 otherwise known as the Anti-violence against women and their children was lectured by Women and Children Protection’s Desk Chief Investigator, SPO3 Elvira C. Degan.  That, most of the women victims of violence kept silent because of fear of not being able to support the children without the help of their husband.  Hence, she encourages women victims of violence to stand-up for their rights before it’s too late.

Lastly, JHMC President and CEO, Mr. Allan R. Garcia, values the shifting roles of women, as a mother, sister, daughter, or a wife, citing his good relationship with his mother. Through his leadership, the JHMC continues to promote programs that recognizes the efforts of men and women as pillars for gender mainstreaming in the corporation.

JHMC is a subsidiary of the Bases Conversion and Development Authority (BCDA).