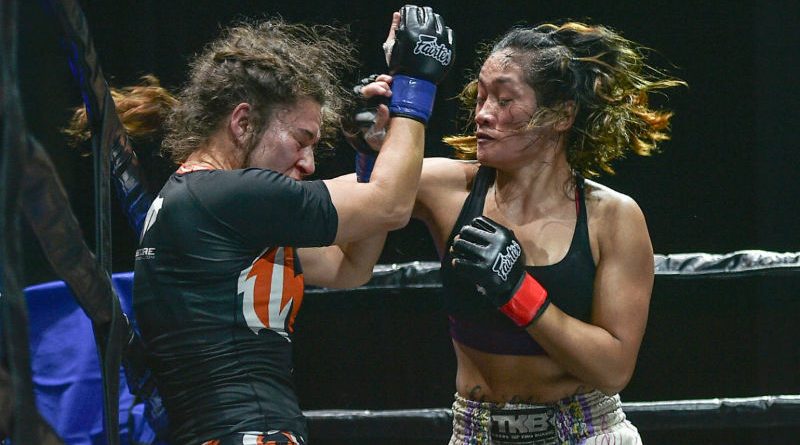 Lost among the buzz of her more popular teammates, ONE Championship is pouring fuel to Jenelyn Olsim’s march as part of the promotion’s main roster by penciling her for a match on March 19, 2021.

Olsim, who found success with the national team, will be trotting into the ring as “The Graceful”, looking to follow the footsteps of Team Lakay stalwart Lito Adiwang in seeking success as part the main roster after hurdling the challenges presented by ONE: Warrior Series.

It will be recalled that Adiwang was able to crack the main roster by starting in the Warrior Series and recorded three straight explosive victories, culminating with a masterful unanimous decision victory against Anthony “The Antidote” Do Tuesday, August 6, 2019 during the ONE Warrior Series 7 to earn a $100,000 contract that goes along with a spot in the ONE main roster.

Olsim is 3-2 in her young MMA career, all accomplished under the Tribal Torogi banner. Her win against compatriot, Dolores Meek, came via an armbar submission during the first MMA bout of her fighting career.

Olsim then shifted her attention to her Team Pilipinas, eventually resulting to a silver medal finish in the 54-kilogram division of the 2019 Southeast Asian Games held here at home.

Olsim has said leaving Tribal Torogi was one of the hardest decisions she has ever made and the transfer was all about her passion and chasing what she really wants.

Olsim did confirm that while older brother Jerry did not tell her to transfer, his and Adiwang’s accomplishments drove her for the change of scenery.

Currently, Jerry is also competing in the Warrior Series fighting under the Team Lakay banner.

Like Jenelyn, both Jerry and Adiwang found his MMA fighting roots with Tribal Torogi before moving to Team Lakay.

Adiwang, in particular, became one of ONE Championship’s rising stars since packing his bags and jumping ship to Team Lakay, which undoubtedly is the most successful Cordilleran gym in relation to sending MMA fighters abroad and bringing the bacon home.

Olsim will have her hands full against Mazar. The 5’5” Brazilian is a relative veteran in fight game, having 10 bouts in her belt since her debut in 2014, winning 7 of them.

She has an impressive finish rate, knocking out 5 of her opponents and submitting another. Only one adversary manage to last the distance during her wins, eventually falling via unanimous decision.

Her defense against the submission is suspect, will all three losses coming via submissions.

Mazar is 1-1 while fighting in ONE Championship. She fell to Ayaka Mimura in her debut on January, 2020 but receovered nicely in her second fight by knocking out Jung Yoon Choi seven months later.

Based on Mazar’s previous fights, Olsim needs to find the right game plan, either to survive the distance and get the decision or end the match early with a submission if she is to make the big splash.