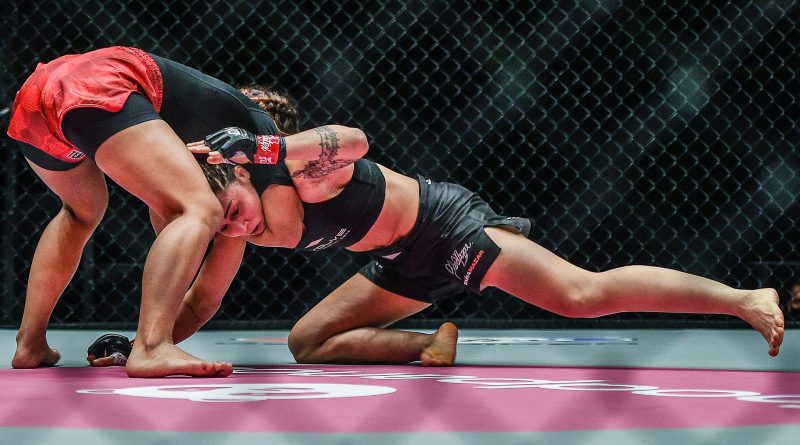 Jenelyn Olsim proved the hype behind her ONE debut is not just promotion as she came trotting in her first fight as part of ONE Championship’s main roster with a lot of swagger.

“The Graceful” executed a powerful guillotine choke that forced Maira Mazar to tap out late in the third round of their women’s strawweight mixed martial arts bout during ONE: Fists of Fury III held at the Singapore Indoor Stadium on March 19, 2021.

Olsim’s performance was textbook as she did exactly what she had to do, take advantage of her rival’s weakness to turn tables around.

While the 5’5” Brazilian has already MMA 10 bouts in her belt, winning 7 of them, a glaring imperfection in her game was bared by her fight record.

She has an impressive finish rate, knocking out 5 of her opponents and submitting another. Only one adversary manage to last the distance during her wins, eventually falling via unanimous decision.

However, her defense against the submission is suspect, will all three losses coming via submissions.

Olsim made that record worse in dealing her another submission loss.

The drama kicked off straight away as both athletes traded kicks. Mazar tried to counter Olsim’s low kick with a right cross, but that led her straight into the Filipina’s oncoming fist, and she dropped to a knee.

The Team Lakay star grabbed a front headlock on her downed rival and looked for a guillotine choke before letting rip with a series of knees to the head. Mazar survived and broke free, though there was little respite for the Brazilian out in the open.

Olsim then clubbed the Evolve product with hard counters and sent her down again with a crunching jab-cross combo. Mazar survived the ensuing barrage by thrashing with upkicks, but all the momentum was in her rival’s favor.

After a brief stoppage for an accidental eye poke, the round ended on the feet, where the Singapore resident managed to find some rhythm with her straight punches.

The action got back to full flow in round two, as Olsim decked her foe with a well-timed push kick. She leaped into her opponent’s guard to land ground strikes, and Mazar responded by attacking for a leg lock.

However, the Philippines National Muay Thai Champion decided offense was the best defense, and she went after her own until both athletes scrambled back to their feet.

Mazar tried to press her Filipina foe to the Circle Wall, but Olsim used a strong Thai plum to stay upright and landed with an elbow on the break. The Pan American Sanda Champion stayed with her straight punches to make effective use of her range and found some success, but Olsim’s counters were still scoring more damage in the exchanges.

After a couple of attempts, Mazar dragged her rival to the mat late in the frame and saw out the round with a flurry of ground-and-pound.

The Brazilian had ground to make up in round three, and she came out behind her straight punches. Olsim met her in the middle, and the fighters had a toe-to-toe exchange until Mazar pushed her rival to the fence.

As she looked for a takedown, Olsim swiftly threaded her right arm under her opponent’s neck and then locked up the power guillotine. The ONE Warrior Series graduate rolled with Mazar as the Brazilian tried to defend and squeezed to seal the tap at 0:41 of the final frame.