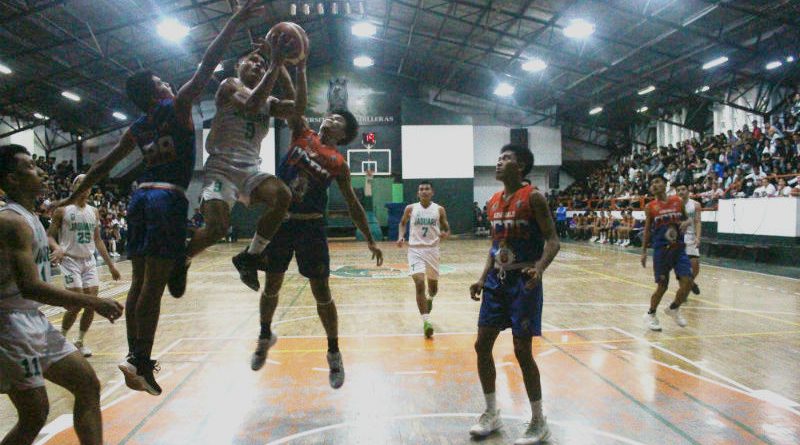 The University of the Cordilleras (UC) Jaguars sent the Cordillera Career Development College (CCDC) Admirals packing with a 99-74 rout on November 11, 2019 at their home floor while securing a finals berth in the 33rd Baguio-Benguet Educational Athletic League (BBEAL) Basketball tournament.

The Jaguars’ defense and outside shooting was at it again in the third quarter as it towed UC to blow the game wide open. It was still a manageable 60-50 game midway through the period, UC ahead, when Lyndon Matbagan poured in five points, including a triple and Erece added two baskets to ignite a rally.

Their defense then took over from there as it forced three consecutive turnovers that resulted to uncontested layups by Del Rosario, Espinoza, and Chiennex Galang to complete a 20-7 run to end the quarter ahead by 23, 80-57.

The UC Jaguars forced a turnover against the CCDC Admirals in thier semis stepladder match.

The Jaguars defensive efforts simply carried over to the fourth while the Admirals failed to capitalize some open shots from downtown until the final buzzer.

The Jaguars will face the University of Baguio (UB) Cardinals in the finals. According to a schedule released by BBEAL, the first game will take place on Wednesday, November 13 at UB.

If the  Jaguars prevail, the second game will be played on Thursday, November 14, at the UC gym.

It was almost a repeat of the same type of defeat by the Admirals against the Jaguars where their youth and inexperience showed its head.

Just like in their previous defeat in the eliminations, the Admirals were in the game early but couldn’t keep afloat in the midst of a UC press and rally.

Admirals Team Manager Jordan Tagle credited the Jaguars hot shooting as the main reason of their downfall but also pointed that by being freshmen and sophomores, his team’s overconfidence and the committing of an unsportsmanlike foul during the second quarter that triggered the swing of the momentum also contributed to their defeat.

It will be recalled that Bryan Gravilez and Will Keane Lee were not able to suit up due to suspension when the Admirals narrowly lost to the Jaguars, 92-85, last October 20 during the eliminations.

The Admirals and the Jaguars were nip and tuck early in the second when the foul was committed. UC went on to take 52-40 halftime lead.

Tagle, however, was still upbeat on the Admirals’ performance this year and next season as he expects the young Admirals to continue developing and getting chemistry as they experience playing in different leagues. He also said their coaching staff led by Jun Rimando are expected to be back in the fold.