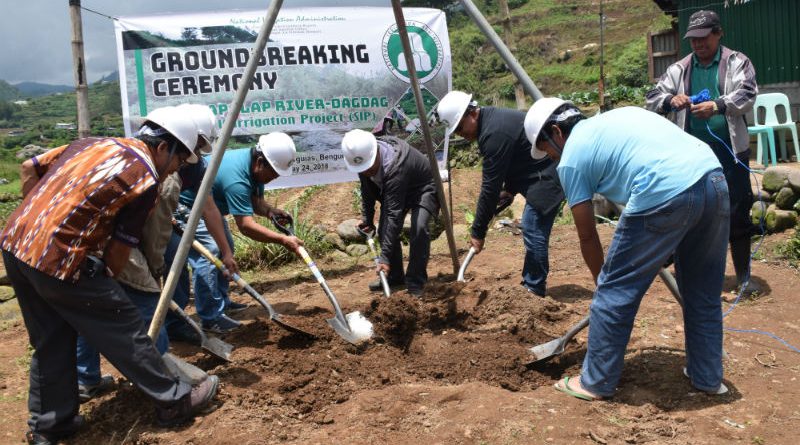 BUGUIAS, Benguet – About 25 hectares of vegetable farms in this town will soon enjoy new irrigation facilities as a P10 million irrigation project breaks ground on Thursday, May 24, 2018.

The Lapalap River-Dagdag Small Irrigation Project (Phase 1) in Brgy. Bangao which is set to benefit about 45 farmers will start anytime this month.

“We enjoin the farmer-beneficiaries, who are organized into Lapalap-Dagdag-Bangao Farmers Irrigators Association headed by Sinto Donato, and other stakeholders to help NIA in the monitoring of the project once the construction starts to make sure that the project is completed according to schedule and plans,” announced Engr. Benito Espique, Jr., the Acting Regional Manager of the National Irrigation Administration Cordillera Administrative Region (NIA-CAR), during the groundbreaking ceremony.

Councilor Ronald Kimakim, the Committee Chair on Agriculture of the Sangguniang Bayan of Buguias, also urged the cooperation of all towards the fast completion of the project so that the farmers can utilize the irrigation facilities the soonest possible.

Meanwhile, Engr. Ronald Bisquera, the newly installed provincial head of the Benguet Satellite Office, lauds the participation of the women beneficiaries during the groundbreaking. He underscored the equally important role of women in all phases of irrigation project development.

The Lapalap River-Dagdag SIP (Phase 1) involves the construction of teruvian intake as diversion along the Lapalap River, lined canals, other canal structures and installation of pipes.

In 2018, there are 39 irrigation projects in Benguet with P172 million budget allocation. These are programmed to generate new area of 360 hectares, and restore and rehabilitate more than 400 hectares. The implementation of these projects is anchored on the government’s build, build, build program and NIA’s development thrust of expanding serviceable areas and increasing irrigated areas nationwide.