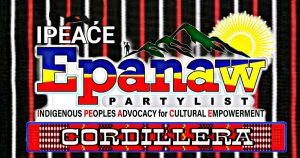 BAGUIO CITY – The programs and advocacies of the IPEACE Epanaw Party-list group are inclusive of the interest of indigenous cultural communities and indigenous peoples around the country and not just confined to IPs living in specific areas.

Former Regional Director Lawyer Marlon Bosantog of the Cordillera office of the National Commission on Indigenous Peoples (NCIP-CAR) stated that while it is true that the IPEACE Epanaw Party-list originated in Mindanao, the group expanded its membership to different IP representatives in other parts of the country, especially Northern Luzon and the Cordillera, to help in advancing the rights and interest of IPs.

Further, he pointed out that his inclusion as the party-list group’s second nominee for the upcoming May 9, 2022 synchronized national and local elections is already a clear indication that the group will work for the advancement of the welfare of IPs from all over the country contrary to claims of detractors who simply want to gain publicity at the expense of the legitimate organizations working for the interest of the IPs.

Earlier, no less than President Rodrigo Duterte formally endorsed the candidacy of the IPEACE Epanaw Party-list group, particularly its second nominee in the person of Atty. Bosantog, in his bid to bring genuine change in the country during a recent speaking engagement aired over various media platforms.

Bosantog underscored that he respects the opinion of people on the matter but such negative perceptions of the group will not actually dampen the gains of the ongoing campaign to gain the support of most IPs so that Igorots will be given added representation in Congress for them to be able to advance the greater interest of IPs from all over the country for the attainment of social, political and cultural transformation towards its aspiration for the respect, protection and fulfilment of the rights of IPs in all aspects of governance.

The IPEACE Epanaw Party-list group is listed as No. 171 in the order of party-list organizations allowed by the Commission on Elections (Comelec) to run for the available seats in the House of Representatives in the upcoming May polls.

The former NCIP-CAR Regional Director expressed his gratitude to the numerous IPs in the different parts of the country that committed their support to the goals and aspirations of the party-list organization and that such support will be complimented with genuine service from the officers and members of the organization aside from working for the greater interest of all the IPs regardless of where they come from.

The IPEACE Epanaw Party-list group’s second nominee hails from Benguet and Mountain Province and was a product of the public education system for his basic education while completing his graduate and post-graduate courses at the Catholic-run St. Louis University SLU). He worked with the Office of the Solicitor-General before being appointed as the NCIP-CAR Regional Director.

1       1ShareQUEZON, Nueva Vizcaya – Embattled indigenous peoples in this remote town are now up in arms against an Australian mining