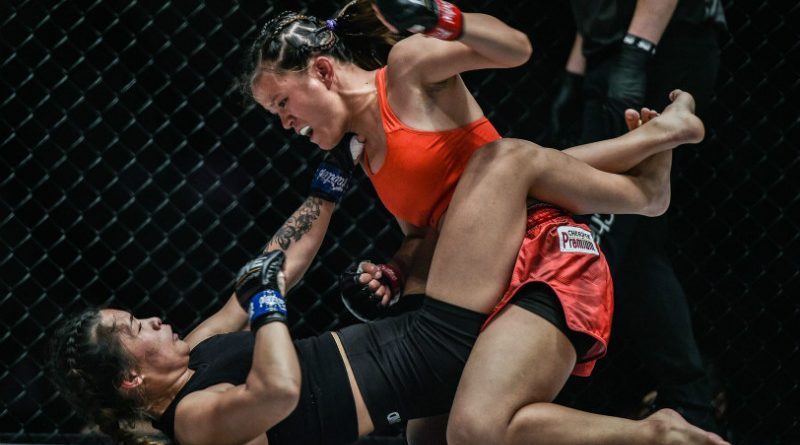 But when that was all but settled, her march towards the top of ONE women’s atomweight ladder resumes. It’s not exactly the news that her opponents are happy for.

“I’m hungry and motivated to re-establish myself at the top. Fans can expect a stronger, wiser, and more dangerous Gina Iniong next year”, Iniong said before the calendars shanged.

It’s pretty sure contemporaries happy for her return to the ONE lineup but facing a member of the famed Team Lakay is not what they are wishing for.

Iniong  has been out of action since her January 2020 victory over India’s Asha Roka.

It’s not only because she has to spent months in isolation, dealing with the ramifications of the COVID-19 pandemic just like everyone else, she had to step away from the limelight to focus on her family after becoming pregnant with her first child with husband Richard Araos shortly after her last bout.

At one point during her pregnancy, Iniong even considered retiring altogether but Team Lakay head coach Mark Sangiao convinced her to make a firm decision only after giving birth.

It would have been a ride in the sunset considering she was on a roll even before winning against Roka with eventful happenings in and outside the cage for this Filipina mixed martial arts veteran.

“I won gold (kickboxing) at the SEA Games. I was able to represent my country and bring glory and honor back to the Philippines. Most important of all, I was able to get married and have my precious baby girl,” said Iniong.

She was a hot streak MMA career wise, her fiery assault only halted by the pandemic. She is on a two-bout winning streak and winning 3 of her last 4 bouts including a domination of Roka .

Her unanimous decision against Roka was pulling a rabbit inside a hat for Team Lakay as she relied majorly on submission attacks, a very rare feat for this gym generally known for their stand-up, strike game.

She was right in the mix for the top prize of the ONE women’s atomweight division when ONE Championship released its first ever rankings.

At that point, Iniong could be headed straight to a lucrative MMA career with the possibility of facing Denice Zamboanga, Stamp Fairtex, and dethroning Angela Lee.

Iniong ultimately decided to continue on with her career, stating that she is more motivated now than ever.

Iniong says the birth of her daughter Gianna Rose has helped put a lot of her life into focus and discovered a newfound appreciation for the simplest of things.

“This year, everything just fell into place for me, and I learned a lot of valuable lessons. The biggest lesson I learned this year is that time is so precious. You can’t put a price on it. It’s the only thing you can never make more of. It’s life’s most expensive commodity,” said Iniong.

While Iniong’s focus over the next few months will be to take care of and raise her child, and spend time with family, “Conviction” says she will also be trying her best to stay fit and healthy.

“Everything is the same. I want to be the best Gina Iniong in the Circle possible. Nothing has changed for me,” said Iniong.

“I can’t wait to get back in the Circle. I’ve missed it. Once I’m cleared to go back to training, and when my body feels right, you can expect to see me alongside your favorite Team Lakay superheroes again.”

Before she took a break from competition, Iniong was ranked the #5 women’s atomweight in ONE Championship. Due to her inactivity, that spot has since been relinquished to Thailand’s Stamp Fairtex.

Iniong, however, isn’t the least bit fazed by the recent turn of events. In fact, she is even more determined now to reaffirm herself as one of ONE Championship’s most talented females.

“My division is really exciting right now. There are so many great talents and I’m so excited for a lot of potential matchups. Any opponent that ONE Championship will give me, I’ll be ready,” ended Iniong.