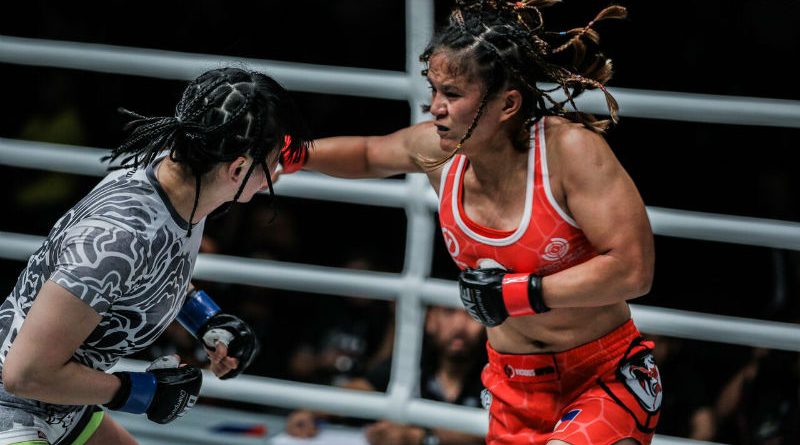 The Team Lakay mainstay redeemed herself in front of a passionate hometown crowd, claiming a unanimous decision victory over The Lady Gogo.

Iniong poured in a barrage of strikes that included with lightning-quick combinations, a staple of Lakay fiughters, to tag Huang repeatedly at the onset of the bout.

Her assault even led to a brief knockdown in the second round, where Iniong connected with a perfectly-timed jab that rattled, and dropped, Huang to the mat for a brief moment.

Huang tried to change the complexion of the contest in the second round as she resorted to her grappling expertise, but Iniong surprisingly overpowered the submission specialist on the mat.

Iniong’s improvements in her ground game got her confident as she took Huang to the mat several times, knowing that her opponent is a submission specialist, and countering with superb defensive moves.

Her excellent nullifying Huang’s takedown attempts with superb defense actually reverse the complex of the match that it was the lesser-known grappler, Iniong, who was threatening with the armbar in multiple occasions.

In the final round, Iniong continued to wear out Huang on the ground, working her way towards a hard-earned decision victory.

When the bell rang to signify the end of the match, the Filipina was smiling from ear to ear as the atomweight contender undoubtedly earned a dominant victory. She moves her record to 7-3, and places herself back into world title contention.

Currently, ONE Women’s Atomweight World Champion “Unstoppable” Angela Lee is slated to defend her golden belt against Yamaguchi in the main event of ONE: UNSTOPPABLE DREAMS in Singapore on Friday, May 18th.

If Iniong continues her streak, a date with the future holder of this title maybe be in the horizon.