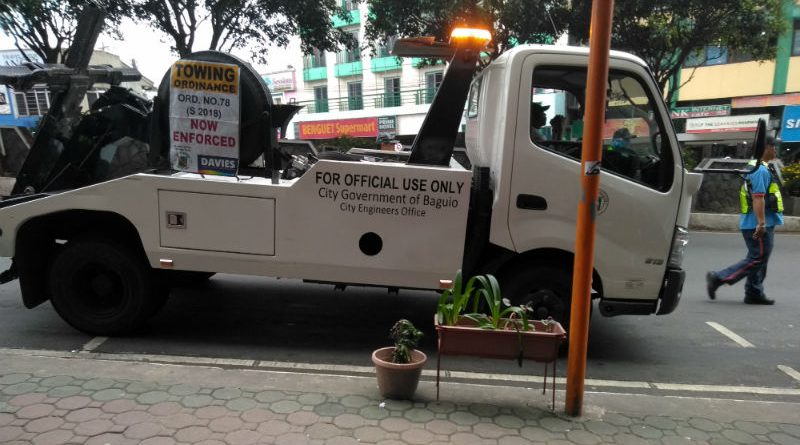 BAGUIO CITY  – The local government plans to increase its existing number of tow trucks to intensify the implementation of the city’s towing ordinance that will help in ridding the roads from unnecessary obstructions that impede the smooth flow of traffic in the different parts of the city.

Mayor Benjamin B. Magalong said that the local government will work out the purchase of additional tow trucks aside from partnering with the private sector to intensify the implementation of the city’s towing ordinance so that the implementation will have significant impact in removing the obstructions on roads in the different parts of the city.

The local chief executive recently conducted an ocular inspection on an 8,000-square meter property in the border of Irisan, Baguio City and Lamtang, Puguis, La Trinidd, Benguet that will serve s the impounding area for motor vehicles that will be towed from the city’s roads.

Initially, the city mayor conducted ocular inspections long major roads in the city and saw for himself the presence of numerous obstructions on the main thoroughfares that have been identified as one of the causes of traffic congestions in the different parts of the city.

“We appeal to our people and our visitors not to obstruct our roads because our enforcers will not hesitate to tow their illegally parked motor vehicles,” Mayor Magalong stressed.

According to him, the initial wave of the implementation of the city’s owing ordinance successful amidst the insufficient number of two trucks that is why one of the initiatives of the present administration is to increase the number of tow trucks so that there can be an aggressive implementation of existing policies that will remove the obstructions on the roads round the city.

The local legislative body enacted the city’s towing ordinance to help in intensifying and legitimizing the implementation of the anti-road obstruction order that was issued by the previous administration of former Mayor Mauricio G. Domogan.

Under the towing ordinance, owners of motor vehicles that are towed by the city’s towing team are mandated to pay the prescribed obstruction fee of P150, the towing fee of fee of P1,500 and the impounding fee of P500 per day of being accosted in the city’s impounding area.

Earlier, the local government deputized some barangay officials in the city’s 128 barangays to assist the law enforcers in the strict implementation of the anti-road obstruction order to help free the roads and streets from numerous obstructions, particularly illegally parked motor vehicles.

On the other hand, the local government also worked out the creation of the traffic and transport management division under the City Engineering office to formulate programs, policies and activities geared towards effectively and efficiently addressing the worsening traffic congestion in the different parts of the city caused by the proliferation of illegally parked motor vehicles on major roads.

Magalong said that the aggressive implementation of the towing of illegally parked motor vehicles in the different parts of the city will continue for as long as there will be individuals who continue to blatantly violate existing rules and regulations governing the presence of illegally parked motor vehicles on roads in various parts of the city.