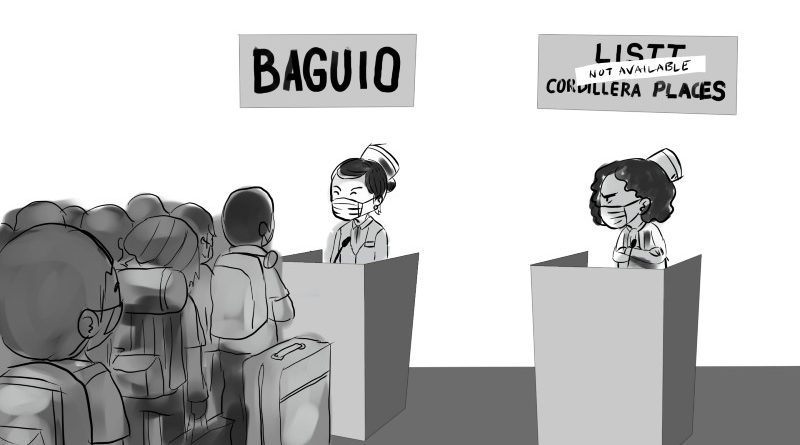 Last  September 1, 2020 during the 111th  Baguio Day anniversary of Baguio City, local chief executives of the city and the different provinces of the Ilocos Region entered into a Memorandum of Understanding (MOU) establishing a so-called tourism corridor between the two areas to allow the cautious, slow and safe opening of tourism to revive the economy of these said places. The major sources of livelihood which are indirectly and directly linked to tourism had stopped following the strict implementation of the Luzonwide lockdown and the subsequent community quarantine in various modes. The expansion of the opening of the tourism industry to other parts of Northern Luzon had been initiated by the tourism department and the city government to allow the smooth flow of visitors between and within these areas without compromising established health and safety protocols by the health department, inter-agency task forces for the management of emerging and re-emerging infectious diseases, local government authorities, and other governing bodies.

The establishment of the tourism corridor in Baguio City and the Ilocos provinces, such as Pangasinan, La Union, Ilocos Sur and Ilocos Norte, is geared towards allowing people of the highlands to visit safe destinations in the lowlands and vice versa. This is part of easing the increasing anxiety among people affected psychologically for being compelled to stay home and restricted from moving around to prevent the spread of the dreaded Coronavirus Disease 2019 (COVID-19). Obviously, people from the highlands have missed the beaches of the lowlands during the implementation of the community quarantine rules and regulations. Likewise, people from the lowlands have missed the city’s cool and romantic weather, pine-scented air and scenic tourist destinations that they had usually enjoyed owing to the short travel time they can have to the city.

When the put up of the corridor was explored, many people asked why the other parts of the Cordillera or the Baguio-La Trinidad-Itogon-Sablan-Tuba-Tublay (BLISTT) that play host to beautiful tourist destinations, were excluded from it with only Baguio being considered. The said question has not been satisfactorily answered because even Tourism Secretary Bernadette Romulo-Puyat preferred not to answer the question during an ambush interview on why the other parts of the Cordillera were excluded from the proposed corridor for greater exchanges of tourists and unified action among the regions to jumpstart limited tourism in their places. Certainly, Baguio City remains part of the Cordillera that is why many people and concerned sectors are wondering why city officials tend to deviate from the motto ‘we work as one, we heal as one.’

As an offshoot of the MOU, Benguet leaders, particularly the local chief executives of the BLISTT, criticized the proposed gradual opening of the city’s tourism industry and its plan to accept visitors from the different provinces of Region I pointing out that this is a product of drastic decision-making, poor coordination and insensitivity on the prevailing condition of neighboring places. Incidentally, Baguio City is bounded by the municipalities of Tuba, Itogon, Sablan and La Trinidad. The decision of the city to allow the influx of visitors, either gradual or calibrated, will surely overwhelm the checkpoints in the neighboring municipalities. The concept of the BLISTT since it was developed in 1995 was for mutual cooperation and understanding in all aspects of development that will have a significant impact on the present condition of the local government units.

Some people have also opined that the tourism department might have been offended by the refusal of the municipal governments of Sagada, Banaue and Tublay to allow personnel of the Office of the President to visit these places for the taking of footages that was to be used for the 5th State of the Nation Address (SONA) last July 27, 2020. Again, no competent person was able to satisfactorily answer the said question that was legitimately raised.

There is really nothing wrong with the proposed re-opening of the local tourism industry and establishing linkages with neighboring regions. However, such linkages should first be established in our backyard, like within the Cordillera, before we consider re-opening tourism for people from other places. We certainly believe the locals should have a first reach at their refreshed or re-started tourist destinations before allowing other people from outside to visit our places. This is a time for inclusive partnerships that will translate to the faster economic recovery in the heavily impacted areas of the country. Surely, northern Luzon, an agriculture and tourism haven, had been significantly affected, including the tourism industry, thus this part of the country should be allowed to open the soonest as part of the economy is driven by tourism.

We could not afford to leave some areas behind in the re-opening of the tourism industry. We must practice in concrete terms the motto of ‘we work as one we heal us one’ but the same should be done inclusively without no one being left behind because there is need for everyone to establish a sense of normalcy in their lives.