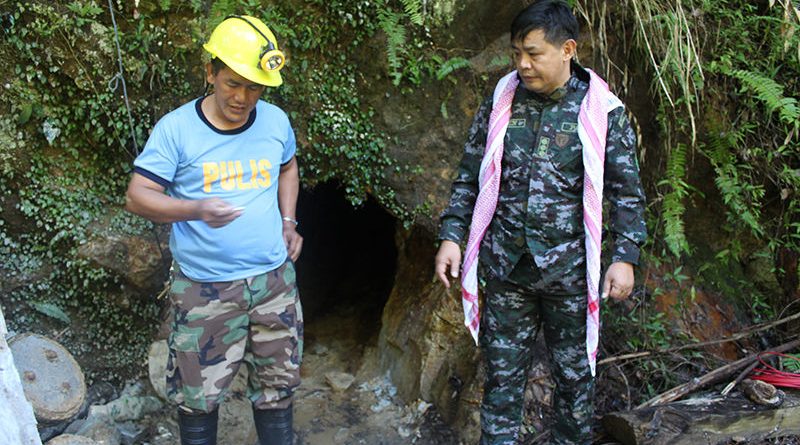 BONTOC, Mountain Province – An illegal mine tunnel, which has been allegedly operating amidst the issuance of a Permanent Environment protection Order (PEPO) by a local court and the marching orders of President Rodrigo R. Duterte against the operation of illegal mining nationwide, was eventually]s plan to established an integrated solid waste disposal facility within a 24-hectare  sealed by combined police personnel and environment officials during an ocular inspection at sitio Latang, Maligcong, here, recently.

Senior Superintendent Allen S. Ocden, provincial director of the Mountain Province Police Office, revealed that the composite police personnel and officials and employees of the Community Environment and Natural Resources office (CENRO), Mines and Geosciences Bureau (MGB) and the Provincial Environment and Natural Resources Office (PENRO) received reports on the continuous illegal small-scale mining activities in the place  that is why  they proceeded  to the area and confirmed the said report, thus, the sealing of the tunnel through the placing of huge boulders and the dismantling of the improvised bridge leading to the mine site.

“It’s high time that we enforce the law to protect and preserve one of the best legacies which we can pass on to the next generations- Mother Nature.  We have to remind our people about the benefits of a cleaner, greener and safer environment,” Ocden stressed.

Earlier, the Regional Trial Court (RTC) Branch 35 in Bontoc issued a PEPO that should have stopped all illegal mining activities in the area but a number of illegal small-scale miners were still able to pursue their illegal operations up to date.

Ocden explained the sealing of the illegal mine tunnel in the area should serve as a stern warning for similarly situated operators of illegal mining tunnels in the different parts of the province because the members of the composite team will not hesitate to visit their place and seal the illegal mine tunnels consistent with existing policies, rules and regulations in fairness to the ones that were earlier stopped.

According to the police official, the government is serious in the campaign against all illegal activities province wide that is why violators will be dealt with accordingly for them to suffer the consequences of their illegal acts that tend to compromise the safety of life and limb and even the state of the environment.

Aside from illegal mining,  Ocden claimed that one of the unabated illegal activities in the province is illegal  logging that is why police operatives have been directed to strengthen their anti-illegal logging operations for them to go after illegal loggers who are trying to test the effectivity of anti-logging  laws, rules and regulations so that they will be imposed the necessary penalties for them to suffer the consequences of destroying the good state of the  province’s environment which is worthy of being passed to the next generations.

Ocden pointed out the law will always prevail and those who continue to commit unlawful acts will eventually suffer the consequences of their unconsunable actuations against people and the environment. By HENT