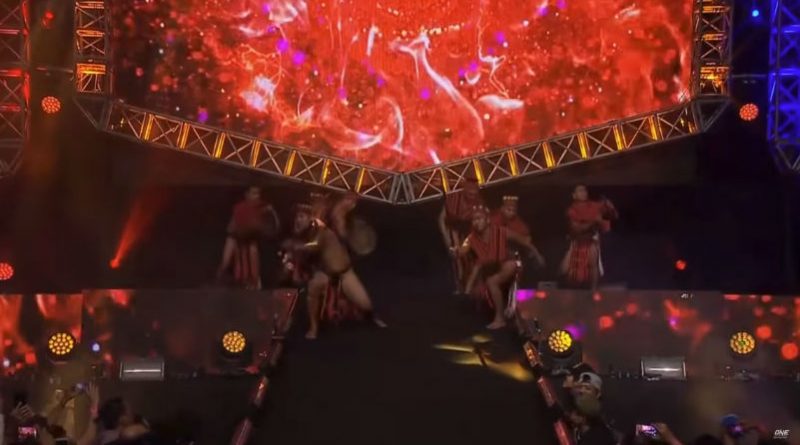 Kevin Belingon’s entrance that celebrated the Igorot heritage during ONE: Reign of Kings held on July 27, 2018 at the Mall of Asia Arena in Pasay City is ranked 70th in ONE Championship’s currently released Top 100 Moments.

Belingon, who faced and defeated Martin Nguyen as the defending champion for the ONE Interim Bantamweight title in the main bout of this event, was ushered by Igorot performers who showcased one of the cultural dances of the people in the Cordillera region. It was a time when the Igorots were featured in a global stage like never before.

This entrance act is currently the highest ranked moment from a Filipino fighter as ONE’s list is still incomplete. Only moments ranked 61-100 has been released as of press time.

Belingon made this list already thrice as he is also featured in two other moments.

The first bout of his now epic rivalry with Bibiano Fernandes is ranked #73 while the aforementioned fight with Nguyen is ranked #99.

ONE describes the Belingon-Fernandes war as the “Most Epic Rivalry” in ONE. “The Flash” defeated Belingon on January 23, 2016 during ONE: Dynasty of Champions 5 by Kimura submission for a seemingly easy victory that widened the gap between both men.

Little did everybody knew that this was just the first chapter of a long story and that after six Belingon fights, they would met again three consecutive times more, with the fourth match coming this October 13 in Tokyo, Japan.

On the other hand, ONE described Belingon and Nguyen’s title match as a “Fast And Furious Main Event”.

Nguyen was trying to make the record books by becoming the first three-division World Champion in mixed martial arts history while Belingon was trying to show he isn’t afraid to take on any comers in pursuit of the regular belt which was then held by an injured Fernandes.

“The Silencer” did not disappoint the passionate Philippine crowd who cheered him throughout the fight with a thrilling victory.

Also making in the list are Brandon Vera’s knockout of Mauro Cerilli at #80, Danny Kingad’s thrilling match against Yuya Wakamatsu at #85, and ONE’s flashy debut in Manila at #87.

Vera has been inactive for two years when he announced his return to the ring with a bang. It was on November, 2018 during ONE: Conquest of Champions at the Mall of Asia when “The Truth” competed on the global stage where he picked up right where he left off with a stunning, first-round, one-punch, walk-off KO of “The Hammer” to defend his ONE Heavyweight World Title.

Kingad and Wakamatsu engaged in a modern classic full of twists, turns, and shifts in momentum when they met at ONE: Conquest of Heroes on September 22, 2018.

“The King” pulled off a unanimous decision victory over “Little Piranha” in that thrilling back-and-forth fight.

Lastly, Asia saw how the Philippines has embraced ONE like perhaps no other nation in region when the promotion debuted on August 2012 in Quezon City. ONE: PRIDE OF A NATION, which featured Bibiano Fernandes’ promotional debut, as well as wins for Team Lakay heroes Eduard “Landslide Folayang and Honorio “The Rock” Banario, became the mark of a long and happy relationship between Pinoy fans and Asia’s biggest martial arts promotion.