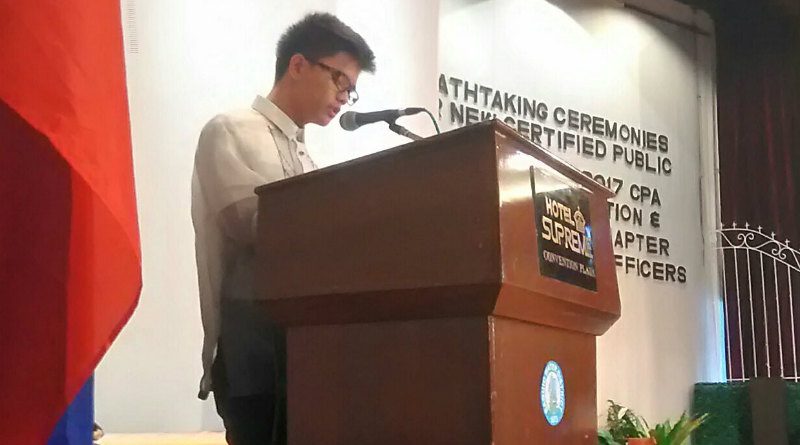 Kevin Cuti Bango, CPA was saving his best when things mattered most. The young man from Lagawe, Ifugao seemingly came out of nowhere to garner an average of 91.33% in the May, 2017 Certified Public Accountant Licensure Examination, placing fifth among 3,389 successful passers.

Bango’s achievement is a truly inspiring one, exhibiting the ordinary achieving something extraordinary, showing that regular and conventional students can also accomplish things thought to be reserved only for the “laudes”.

The son of proud parents Baltazar Bango and Leonora Cuti Bango was not your typical topnotcher, you know, the one who flashes awards and accolades which gives indication of what they can do in examinations like this one. He was an average student at best, who hasn’t shown consistent indication of his capability to stay abreast with other aspiring CPAs in possibly topping the examination while studying.

In his around 20 years of obtaining education, the finest Bango can come up with is a Best in Math award during his high school days at the Don Bosco High School. He did not obtain any academic awards during his six-year elementary tenure at the Lagawe Central School. He had none of those “laude” stuffs when he graduated from the Saint Louis University.

Thing is, he must have learned something from these institutions and kept them inside him for future use because he delivered big-time when it mattered most.

Allan Frank Silva, the current Department Head of the School of Accountancy and Business Management (SABM) of the Saint Louis University (SLU), acknowledged Bango’s achievement as more memorable than other similar situations.

“This is an average student who went through trying times in the university but has managed to maximize his potential and excel in one of the most difficult licensure examinations in the country”, he said.

Bango, by his own admission, did not have a stellar record in college. He narrated how his grades were average during his first year, falling to below average as the semesters went by and, eventually, failing some of his subjects as his records sank to the deepest of the deep.

What wasn’t lost in his mind was his capability to complete and finish questions, fully aware that the culminating activity of all his endeavors was a licensure examination.

“I did not really care (about the failing grades) because I believed that grades are just numbers and doesn’t really dictate my capabilities. Kahit bumabagsak ako, never kong na feel na mahina ako or bobo ako. I know I could do much more and that I just lacked focus and action”, he said.

Then he turned around his fortunes and started displaying his skills to make him a licensed accountant.

The sight of his classmates studying harder and the thought of disappointing his family due to academic failures was all he needed to turn things around. He came to realize what right decisions to make to get to where he is now, finally showing the abilities and talents he had kept from his peers and instructors for quite a while.

He started studying harder in his fifth year when he saw everyone around him doing it. He may be late in getting academic awards due to the earlier failures but still early in having a sufficient preparation for the licensure exams.

He made a conscious effort to prepare harder for the board exams. He made a correct decision of deferring taking the exams a year ago when he thought the result would only disappoint his family and take another round of review classes.

It is in this second review attempt that tangible results showed his efforts are paying dividends as he began topping pre-board examination administered by The Review School of Accountancy (ReSA), including placing first overall in the final pre-boards.

In the end, while many were unaware of what this young man can do, he conquered one of the most difficult exams to pass in the Philippines and bested some 9,640 who took it along with him.

Like many others before him, Bango did not intend to take accountancy initially, preferring engineering. It probably did not matter much because his love for numbers was suited for both courses. Asked now how he would described accountancy, he said it is a tough but learnable subject.

Bango credited mentors from SABM-SLU as a key factor for his achievement. He made specifically mentioned of three of them, Joseph Mendoza, his first ever accounting instructor; Christopher Espenilla, who was never his instructor in college but became his reviewer at ReSA; and Marc Oliver Castaneda, the current Assiociate Dean for Accountancy and Business Laws, who was among the last professors who handled him and among the few who correctly predicted his capability to top the board exams.

Silva said accountancy students who are struggling with the difficulty of passing one of the hardest courses, can look at Bango as a model. “He has not lost hope in the midst of stumbling blocks but instead used his love for his parents and siblings to bounce back and shine”, he said.

Bango got a nice early return for his admirable efforts as SLU rewarded him handsomely with a substantial cash award for his achievement.

More should be on the way as he is currently contemplating to finalize his choice from auditing related job offers from two of the prominent firms in Metro Manila, having preferred to carry out his profession in the public practice field.