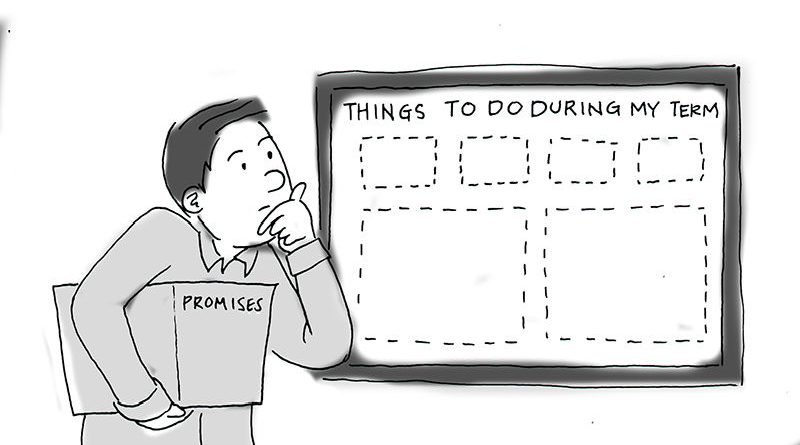 The new set of local officials assumed their respective elective positions on June 3, 2019 pursuant to the 1987 Philippine Constitution and as embodied in other pertinent issuances, rules, and regulations. For now is a period of adjustment for local officials and their co-terminus staff but for re-elected and comebacking local officials, it is simply doing their routine in the public service. We hope local officials studied their mandates well, lessons learned, and the suggested and recommended solutions to the problems  for the necessary changes to be introduced for the  improvement of  existing programs, projects and activities within their areas of jurisdiction.

In between the proclamation of winners and the assumption into office of the new set of local officials in the different parts of the country, interest groups, supporters of winning candidates, among other sectors, had been keenly monitoring changes in the administration through their friends in government, including scouting for the positions they feel they are entitled to as payback for their support.

Some officials started hitting the ground as soon as the clocked struck 12 noon of June 3, 2019,  an indication they mean business in fulfilling their election promises and not fail the high expectations from the people who voted for them. On the other hand, some are still groping in the dark and careful of their actions knowing people are closely watching them if they really are working for the greater interest of the populace and keen on fulfilling their promises. For the re-elected and comebacking ones, the fresh mandate gives them reason to go back to their regular routine but probably thinking of performing better than before, especially in delivering the needed services to their constituents.

It is important for our leaders to seriously practice the government’s aggressive campaign for good, transparent and accountable governance by putting in place the mechanisms and processes that will make this a reality to the least of their constituents . Our leaders might have won the political exercise and the real work now begins. Every local government has its own share of pressing concerns that need short, medium and long-term actions from their leaders. Adopting a participatory, inclusive, transparent and accountable governance builds ownership of the processes and results among the constituents which shall deter the blaming that will come later. Leaders do not have the monopoly of knowledge and skills to unilaterally deal with each situation thus the need for participation of constituents in seeking changes for the better.

Unfortunately, as is the usual case, supporters of elected local officials feel entitlement and are now demanding payback for the support they gave to the winners. The officials have to reign in their supporters as this can be their downfall. No matter how good the individual official’s intention are if supporters are bullies, any good action of the official can be undermined. Payback should not be used by our leaders to abuse their power just to satisfy the demands of those who spent for their rigorous campaign.

We give our leaders the freedom to start working and not to pester them with unnecessary pressure that will affect their decision-making. The first 100 days in office of our leaders are critical as these benchmark their performance and gives an indication of their governance approaches.

For us in the media, we have the so-called honeymoon period wherein we simply refrain ourselves from rendering unnecessary criticisms against our leaders during their first 100 days. However, this does not deter us from delivering news that may be unpalatable to the powers that be. Surely, we recognise that election promises will be not fulfilled overnight. The honeymoon period is just  a ceasefire but when the same cannot be voided, it will provide the avenue for media to air their observations and criticisms to the programs, projects and activities of government that are not done above board.

Media is at your back if you are performing well or even above of what is expected but media will be your worst enemy if the greater public interest is being compromised by politicians and their supporters. Be that as it may, we congratulate all officials and we reiterate our call for transparent, accountable and participatory governance. That way, media will have reliable materials to work on and can be helpful in informing the public.