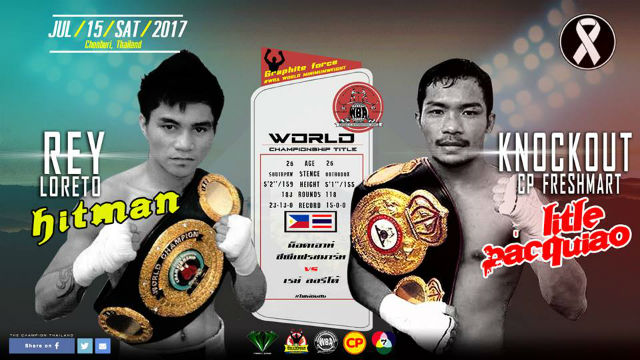 Rey “Hitman” Loreto could be in line to give the Philippines a fifth current world champion when he faces World Boxing Association (WBA) minimum weight champion Thammanoon Niyomtrong in a mandatory defense title bout on July 15 in Chonburi, Thailand.

Loreto, a native of Davao Del Sur now based in La Trinidad, got long overdue title shot after Niyomtrong failed to defend his title for over a year.

The WBA rules stipulate that champions must defend their title against the official contender every nine months from the date they become champions. Further, when the mandatory period elapses the champion cannot defend his title against any boxer than his mandatory challenger

Niyomtrong, monickered the “Knockout CP Freshmart”, won the minimum weight title last June 29, 2016 against Byron Rojas in Thailand. He defended it twice, against Shin Ono last December 14, 2016 and Go Odaira last March 1, 2017. Neither Ono and Odaira were the mandatory challengers.

Loreto’s last ring appearance came last August 19, 2016 when he downed Rungrit Sor Visetkit for his seventh consecutive victory, 23 overall, against 13 losses. 15 of his wins are by kayoes.

Niyomtrong is 15-0 with seven victories by knockouts.

The mandatory defense was ordered by the WBA last April, upon expiration of the mandatory period.

Meanwhile, Manny Pacquiao is set to defend his WBO Welterweight title against Australian Jeff Horn in Brisbane, Australia on July 2, 2017. The card will be aired starting 9:00 to 10:00 AM in the Philippines.

The bout can be availed live, commercial-free, and in high definition from Sky Cable/Sky Direct for only P949. Interested parties may visit mysky.com.ph/pacquiaoppv or call 442-4841 for details.

This post has already been read 1303 times!It’s a rare sight to see Team Lakay fighters seethe and seemingly lose