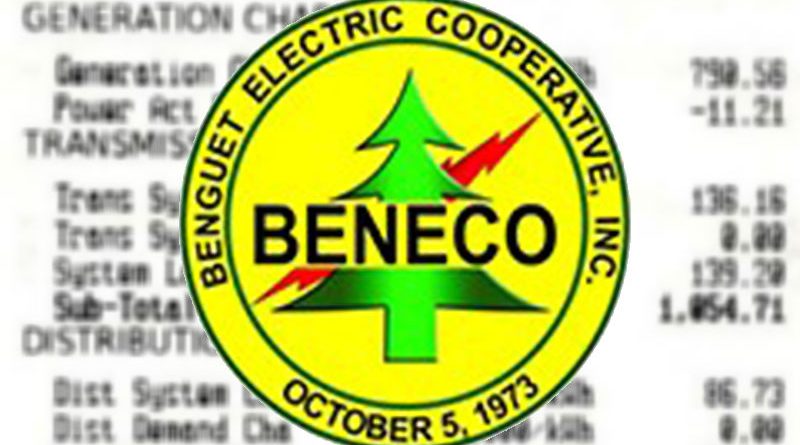 BAGUIO CITY – Power rates in the franchise area of the Benguet Electric Cooperative (BENECO) are likely to increase in the coming billing cycles following the skyrocketing hike in coal prices in the world market aggravated by the ongoing invasion of Ukraine by Russian forces.

BENECO General Manager Engr. Melchor S. Licoben disclosed that the price of coal in the world market is now $400 per metric ton which is much higher than the projected more or less $300 per metric ton possible threshold.

Historically, Licoben explained that the prices of coal reached a high of $130 per metric ton in the world market in the past 15 years and that the prevailing prices now is more than triple than the highest rate that was recorded.

When the coal prices started to move in March 2021 where the projected threshold was already breached, the BENECO official claimed that the electric cooperative immediately started working with the power supplier to find ways on how to mitigate the effect of the same to the existing power rates that allowed the fixing of the generation charge to P4.9500 to P4.9501 per kilowatthour.

He stipulated that BENECOs power supplier, the Sual-based TEAM Energy Corporation, already sent word that it could no longer absorb the significant increase in coal prices in the world market that is why the generation charge that is being billed to their clients might move in the coming billing cycles.

According to him, when there was an initial movement in coal prices last year, the generation charge that was billed by the power supplier to the different electric cooperatives and private power distribution utilities fluctuated that prompted BENECO management to enter into a temporary agreement to mitigate the effects of the uncontrolled coal prices to the power rates being charged to the member-consumer owners

Licoben asserted that the ongoing conflict between Russia and Ukraine also plays a major factor in dictating the prevailing prices of coal in the world market that is why the immediate settlement of the dispute might help in stabilizing not only the coal prices but also the prices of oil which is now also continuously increasing.

He claimed that there is no clear estimate on what will be the increase in the power rates of consumers as the same will be dependent on the generation charge that will be billed by the power supplier which will be passed on to the consumers through their monthly power bills.

Licoben underscored that the electric cooperatives and the private power distribution utilities have no direct control on the generation charge being billed by the power supplier as the same is dependent on the coal prices and the peso-dollar exchange rate.

BENECO remains to charge its consumers with the cheapest power rates that are comparable to the power rates of private distribution utilities that are even more than 15 times its size and areas of coverage. It is also one of the top performing electric cooperatives in the country having achieved its Class AAA category and having maintained the same over the past several years.

This post has already been read 48 times!Two individuals were now facing charges for violation of RA 9165 or the

May 17, 2022 Herald Express News Team Comments Off on unity agenda, economic and pandemic measures top priority of house in next congress – Romualdez
Sports

May 16, 2022 ONE Championship Comments Off on Jenelyn Olsim returns to The Circle on June 3
This site uses cookies: Find out more.