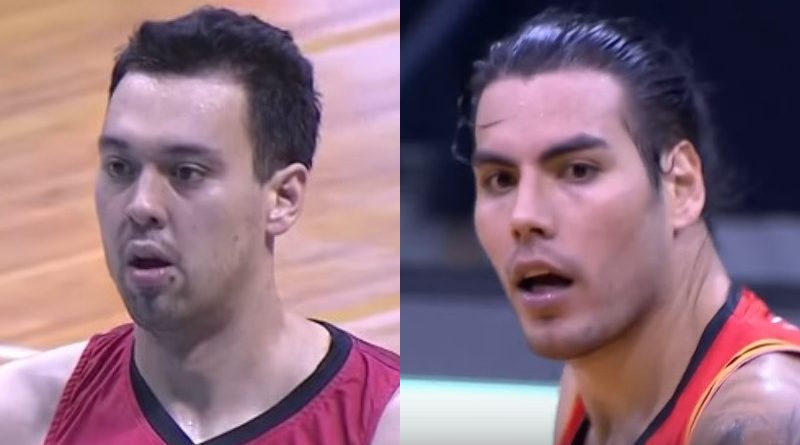 When the rumored one-on-one trade between big men Greg Slaughter and Christian Standhardinger was finally consummated by Barangay Ginebra and NorthPort earlier on March 4, the thought of where this ranks among the best looking but lopsided trades involving PBA’s bigmen.

These kind of trades do seem look good on the surface but eventually turn out to be lopsided after substantial results are registered. Here are my top best looking but lopsided one-on-one PBA bigman swaps and where this recent Barangay Ginenbra – North Port exchange ranks among them:

1. Ramon Fernandez (to San Miguel Beer) for Alberto Guidaben (to Purefoods) in 1988

This was actually the second time the long-time rivals of Crispa-Toyota heydays were traded for each other. (More on the first later)

Guidaben was a vital piece in the star-studded starting five of the Beermen that includes Ricardo Brown, Samboy Lim, Hector Calma, and Alvin Teng.

He has already become one of the pillars of the Beermen squad, bagging his second MVP title and being part of two championships, including the 1988 Open Conference  against a rookie Purefoods franchise led by playing-coach Fernandez himself, during his two-year stint with the team.

He was already a 14-time champion when the trade was consummated.

Fernandez was a 3-time MVP and 12-time champion at the time this trade happened. He was earlier selected to lead the young star-studded squad composed of Alvin Patrimonio, Jojo Lastimosa, Jerry Codinera and Glen Capacio.

The trade was initiated by the Purefoods camp due to Fernandez’s his alleged involvement in game-fixing that ultimately led to his unexpected benching during the 1988 All-Filipino finals.

San Miguel definitely got the better of this trade as it went on to win four PBA crowns in a row immediately after the trade, starting with the 1988 Reinforced championship followed by the third grand slam in PBA history in 1989.

Fernandez and Brown were neck-to-neck in the MVP race during the year of the trade but “El Presidente” narrowly edged out the “Quick Brown Fox”, who got injured during the 1988 Reinforced Conference playoffs, for MVP honors. This was his fourth, then an unprecedented record.

Fernandez led the Beermen to three more titles before retiring as a Beerman at the end of the 1994 season.

Meanwhile, Guidaben seemed to have lost his luster after the trade, becoming a journeyman. He lasted only a conference for Purefoods, departed for Alaska, where he would play for less than two uneventful years before transferring to two more teams to end his career.

2. Christian Standhardinger (to Ginebra) and Greg Slaughter (to Northport) in 2021

While I may be proven wrong in due time, I have to rank this second all-time for now.

Although the result of this trade will be determined in years to come, both men are arguably still in their prime with Slaughter being 32 and Standhardinger being 31.

With Slaughter rejuvenated by his one-year hiatus, both are appearing to have much basketball left in them and could be of great service to their new ballclubs for at least four to five more years.

Ginebra stand to benefit a lot from this trade as it gets rid of a slow center that duplicates the playing style of its resident power forward in exchange for a tougher, more mobile inside operator who perfectly complements the rest of the Gins’ starting unit.

Standhardinger can definitely complement better Ginebra’s lineup than Slaughter. His partnership with Japeth Aguilar tends to maximize the talents of both men as he provides the much needed muscle and energy to go up against bruisers in the paint, something that Aguilar doesn’t do when he plays center.

Together with Standhardinger on the floor, Aguilar can offensively take advantage of his consistent perimeter shot and could cheat on defense to go for blocking shots knowing C-Stand is mobile and strong enough to protect the shaded lane.

Standhardinger’s presence also allows Ginebra the luxury of improving their already potent All-Filipino line up that recently won the 2020 Philippine Cup bubble edition. They can now confidently and effectively put an undersized Scottie Thompson at small forward during the Philippine Cup  and  fielding the versatile Justin Brownlee in the same position during the import-laden conference this year.

Meanwhile, Northport also improves it lineup as it not only gets the inside presence it desires, a big bonus awaits if Slaughter indeed developed a reliable outside shot as seen in his recent videos.

However, it is a suspect if Slaughter can match what Standhardinger could do for Ginebra in terms of challenging for multiple titles and deep playoff runs in the next four to five years.

Asi Taulava was the most prized recruit during 1998 season. He was already a 1-time PBA champion and a MVP awardee at the time of the trade. He was the first Fil-foreigner to win an MVP award since Brown did it in 1985.

Ali Peek, on the other hand, was an undersized 6’4” center who makes up the deficiency in height with muscle. The brawny rebounder was the paint demon for Coca-Cola during his stint with the team.

It turned out that Peek would eventually become a vital cog for the Talk ‘N’ Text franchise title runs, contributing heavily during the team’s winning of five PBA titles, including four Philippine Cup crowns.

Meanwhile, the Tigers couldn’t get to the promised land during Taulava’s three-year stint with the team and was eventually traded by the team to the Meralco Bolts.

The first trade of Fernandez and Guidaben became the knot that tied them to each other during their careers. It was Manila Beer and Tanduay who initiated the “giant” trade post the Redmanizers-Corollas rivalry.

Guidaben, meanwhile, could not get it going with the Brewmasters. Although he reached the finals twice during his two-year stint with the team,  he got blanked each time  even during conferences where it got prolific imports that included Michael Young.

This trade could land higher in the list but the shortness of the evaluation period due to the disbanding of the teams involved pushed it lower.

Manila Beer disbanded after two years, paving way for Guidaben to relocate at San Miguel Beer where he found more success while Tanduay followed suit, disbanding for the first time, three years after the trade paving way for Fernandez to get a duty with the Purefoods franchise.