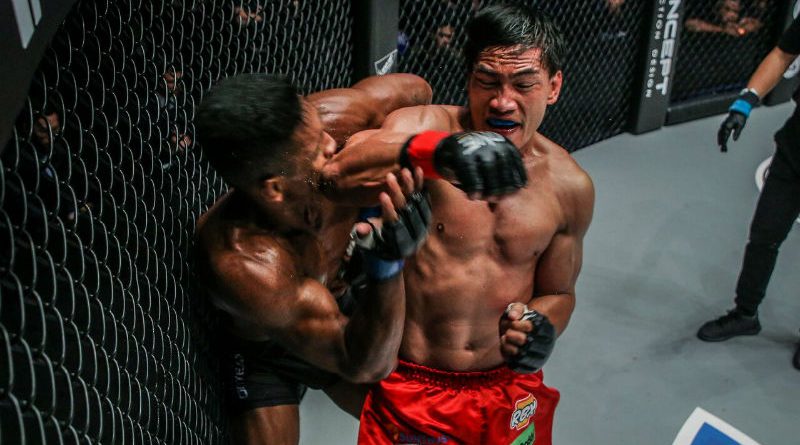 In a twist of irony, Folayang’s MMA journey has eerie similarities with Rey Tam. They both experienced roller coaster rides in their careers.

“The Landslide” started as a member the Philippine Wushu Team where he rewarded the country with eleven major medals, including three golds at the Southeast Asian Games, a silver in the 2006 Doha Asian Games, and bronze medals in both the 2005 World Wushu Championship and the 2002 Busan Asian Games.

His gold medal match at the 2011 South East Asian Games saw him won with a spinning back kick KO.

While still actively participating in the discipline, he simultaneously adapted his skills for the MMA cage where he would eventually introduce the region to places unimaginable.

He made his professional MMA debut for Universal Reality Combat Championship (URCC) on June 2007 and knocked out Allan Co in the first round to take home the belt at stake in the bout.

He then signed with ONE Championship in 2011, now known for propagating MMA in diffirent parts of Asia, and defeated A-Sol Kwon via unanimous decision during the ingural show’s main event.

“Landslide”, however, would experience a skid, losing his four of his next bouts, including a URCC Lightweight Championship title bout, and had to refuse a ONE lightweight title shot due to conflict of commitments.

One of those losses was to Timofey Nastyukhin in December 5, 2014, the end of which was started with a flying kick and ended with soccer kicks. The heart-breaking loss made him ponder thoughts on hanging the gloves permanently.

A one-year hiatus, however, cleared web combs from his head. He returned to the cage on January 29, 2016 and went on a rampage, winning four straight, including a historic win against Shinya Aoki for the ONE Lightweight title and defending it against EV Ting.

His conquest of Aoki was adjudged by ONE as second best moment in their top 100 historical moments list.

A devastating setback followed when he lost his title to Martin Nguyen via devastating knockout right in front of the Mall of Asia crowd.

He, however, again displayed resiliency by racking up three straight wins. The streak started with unanimous decisions against two unbeaten Russians and a masterful display of the patented spinning attacks against Amir Khan to win the lightweight belt back.

Folayang is now on another skid, losing three of his four matches, including yielding the belt back to Aoki and losing what seemed a bout that was his to Eddie Alvarez.

Another shot at reversing this is in the horizon as Christian Lee, the now owner of the ONE lightweight belt, is interested to defend his title against him.

Folayang is currently 22-9 with six knockouts and 2 submission victories.

By: Armando M. Bolislis
Photo by: ONE Championship