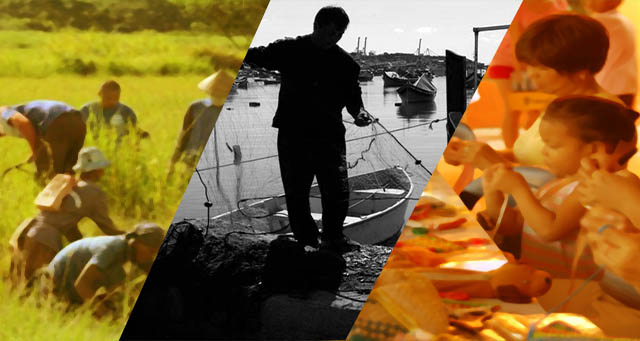 Baguio City- Former Benguet Governor Nestor B. Fongwan challenged local officials in the region to prioritize human development in their programs instead of concentrating too much in infrastructure.

In his message as guest speaker during the Regional Nutrition Awarding Ceremony last October 13, Fongwan stressed the importance of looking for ways to improve the quality of life of the people.

“We have to focus to our people and we have responsibility for them as their local leaders.” Fongwan added.

Fongwan has served his three terms as governor of Benguet.

During his term he supported the nutrition program by allotting funds for the incentives of the Barangay Nutrition Scholars (BNS) and for the purchase of micronutrient supplements that contributed in the improvement of the nutritional status of Benguet populace especially the children.

He encouraged the local officials to give importance to the needs of the BNS, the frontline against malnutrition.

“It’s but proper to recognize our BNS as a way of recognizing and giving importance to their role in shaping up the health of our people.” He said.

During his term, his advocacy in nutrition paved the way for Benguet to be recognized this year as crown awardee in the Regional Green Banner award provincial category with a MELLPI score of 92.71% and they will also be awarded at the national awarding ceremony in December and will receive a cash award of 500 thousand pesos.

Another awardee is the municipality of Tublay as the best municipal nutrition implementer in the province of Benguet, and bested other municipalities in the region with a Mellpi score of 99.90% and received the Regional Green Banner Award.

Meanwhile, Benguet governor Crecencio Pacalso in his response to their award said that parents are to be blamed on the problem of malnutrition among the children. He said that the kind of food that the children are eating is the responsibility of the parents.

Pacalso assures that they will sustain the nutrition program of the province.

It can be recalled that Benguet was named the best province in terms of human development in the Philippine Human Development Report (PHDR) in 2013.

The Governor said that he got information that this year the province top again the validation.

The PHDR is an update on the progress of the country’s provinces in terms of the income, health, and knowledge of their residents.

Fongwan rallied to the officials to come out and deliver the government services especially health services right at the doorstep of the people in the grassroots level.

He said that officials while in position must know the other programs of the government and do something to uplift the lives of the people.

“Officials and other government workers must immerse themselves in the community to learn the needs of the people.” He said.

The 2016 Regional Nutrition Awarding Ceremony being conducted by the National Nutrition Council Cordillera is one way of recognizing the sacrifices of the frontlines against malnutrition that significantly contributed to the achievement of the region’s Millennium Development Goal (MDG) nutrition targets. JOSEPH MANZANO

Baguio is major source of revenue in Cordillera

May 21, 2022 Dexter A. See Comments Off on Baguio is major source of revenue in Cordillera

This post has already been read 585 times!The Cordillera office of the Bureau of Internal Revenue (BIR-CAR) disclosed that Baguio

May 21, 2022 Hent Comments Off on Mayor hails management of private hospital
covid-19 advisory and updates

May 21, 2022 Dexter A. See Comments Off on Baguio files protest versus water permit application
CAR Region

May 21, 2022 Hent Comments Off on “Tagel’ willing to work with non-partymates
Business and Livelihood

May 21, 2022 Hent Comments Off on 3 Japanese employers to visit MP for skilled workers
Headlines

May 20, 2022 Armando Bolislis Comments Off on Cagulangan’s Stockton, Harden-like plays lift UP to end 36-year drought
Agriculture, Fishery and Pets

May 20, 2022 DENR Press Release Comments Off on Personnel and officers from DENR gets training workshop
This site uses cookies: Find out more.