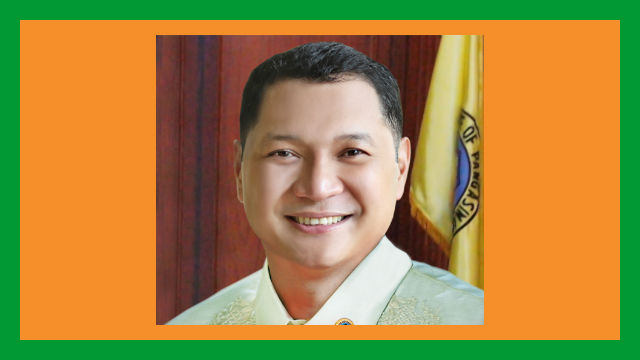 LINGAYEN, Pangasinan – “Let us celebrate our love for our beloved Pangasinan every day.”

This was pointed out by Governor Amado I. Espino, III as he led the commemorative program in celebration of the 438th Agew na Pangasinan held at the Sison Auditorium on April 5.

The father of the province of Pangasinan faced the spectators with a “weeping heart” as their family mourns for the passing away of Victoriana T. Espino, his grandmother and the mother of former governor and now fifth district representative Congressman Amado T. Espino, Jr.

Mdm. Espino passed away in the afternoon of April 3.

While holding back tears, Gov. Espino called on to every Pangasinense for collective efforts to preserve the heritage of Pangasinan and leave a benchmark of excellence for the younger generation of Pangasinan.

“You as leaders and as our fellow Pangasinenses, with your influence and power, sana kumbinsihin po natin ang ating mga kababayan to also do their part,” said Gov. Espino as he urged the local officials to further support the provincial government in the delivery of public service.

As such, Gov. Espino pledged his commitment to make every Pangasinense realize the shared vision for Pangasinan as  “the best place to invest, work, live and raise a family,” and to help attain its mission: “to make Pangasinan number one.”

On behalf of Cong. Espino, Jr., who is the guest of honor and speaker of the event, the provincial chief executive conveyed his message which centered on “genuine love” for the province.

It can be recalled that eight years ago, under the helm of Cong. Espino,  the province of Pangasinan began to celebrate its founding anniversary every 5th day of April following a thorough research conducted by a committee which he himself formed.

In his message read by Gov. Pogi, Cong. Espino stressed that “genuine love” brought Pangasinan and its people to greater heights of success where public service stands at the peak priority of the provincial government to respond to the basic needs of the masses.

Meanwhile, Vice Governor Jose Ferdinand Z. Calimlim, Jr. exhorted the spectators to leave a great legacy that young Pangasinenses will be proud of.

“Let us unite and be a one true family,” said Vice Gov. Calimlim.

The founding anniversary celebration started with a thanksgiving mass at 8:00 a.m. officiated by Archbishop Ricardo L. Baccay, followed by the blessing of the ‘Abong na Dayew’ and opening of the Hall of Fame Exhibit situated infront of the Urduja House.

A light and music show dubbed “Kidiyam PangAwaran” (Sparkles of Pangasinan History) was held in the evening at the Capitol Plaza.