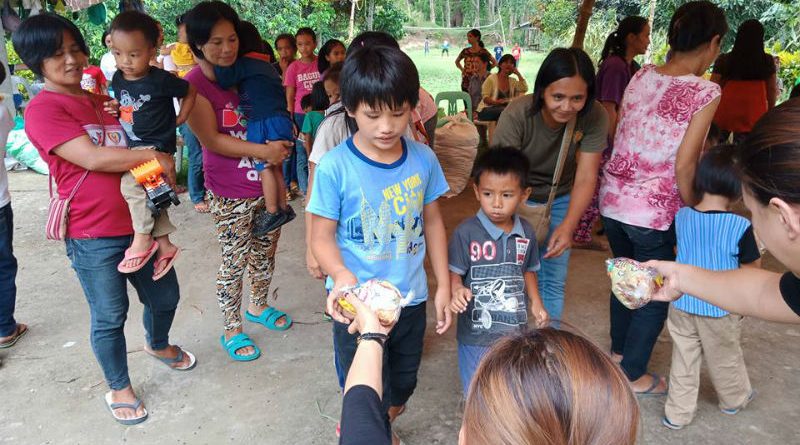 In line with the aim of giving back to the community, an outreach was done in Sitio Ampungot, Sagubo Kapangan, Benguet on May 19, 2018 by the Benguet State University -Development Communication Batch 2008 .

The outreach includes the distribution of shoes and clothing’s for men, women and children. School supplies for each elementary pupils and toys to the community children were also given.

According to Michelle Gatab-Laruan, one of Devcomm batch 2008, the outreach was conceptualized during their tea time in celebration of their 10th anniversary as graduates.

“We are actually 33 in our batch but only three of us here to represent the entire batch as our other batchmates cannot come. Even so, they have contributed cash and donations which we are going give to you,” said Gatab-Laruan to the community.

More than 40 sacks of clothes, toys, shoes, and books was donated by their batch, their friend and relatives

The community members carried the dry goods from the road down to the barrio school by walking almost two hours.

Danny Eke, barangay chairman, shared about Sitio Amyungot and the local officials expressed their gratitude in behalf of the community.

According to Eke, there are more than 50 households in the community. The main product of the residents is softbroom that is being transported to La Union. Also, Badi Falls, the emerging tourist spot of Kapangan is located in the Sitio.

“We are grateful to the batch 2008 that we are chosen to be their constituent of this activity. This is a big help to the community especially to our children for their school supplies,” said one of the barangay kagawads.

Moreover, Wilma Lampitao, also a member the batch, shared a story about the man and the seven stars of Kapangan from the compiled stories of the Alapo-Benguet edition. It was then turnovered to the Ampungot Barrio School.

Lori Bolona-Beding, another member of the batch, distributed eggs for households and the other donations to the community.

In return, the community gave fruits and soft brooms to the members of the batch.

“We would like to say big thanks to batch 2008 for their help and for enduring the way going here. May you continue spread help to the one who needs the most,” ended one of the community members.

By: May Ann Pedro and Aurita Budikey