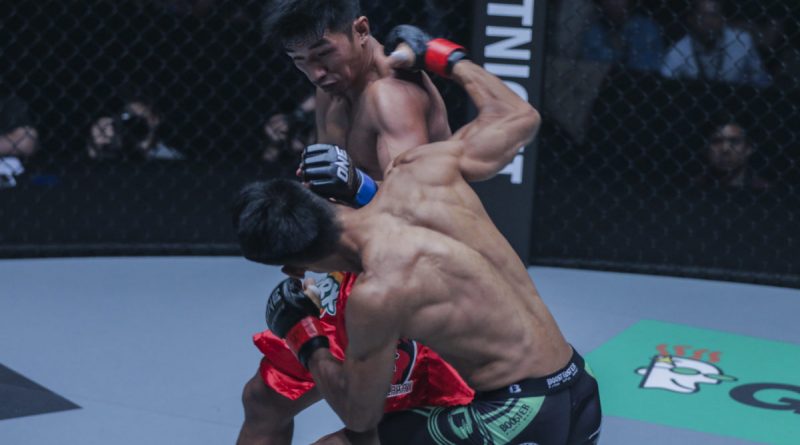 Geje Eustaquio considers himself as a fortunate individual, but he has always possessed the drive and talent to achieve all of his lofty goals.

The 28-year-old Baguio City native has capitalized on every opportunity that has come his way in his professional mixed martial arts career.

As a result, Eustaquio has a Master’s degree and is a perennial contender in ONE Championship’s talented flyweight division.

Training out of the legendary Team Lakay, Eustaquio made his professional debut in February 2011. He competed on three local shows, winning two of the contests, before signing with ONE Championship.

Eustaquio made his promotional debut a year later against Alex Silva at ONE: BATTLE OF HEROES in February 2012, and it was a night he will never forget.

“My first ONE Championship fight is the most memorable to me,” he shared. “It is the biggest victory of my career because it was the first time I won internationally.”

Ever since he became part of ONE Championship’s burgeoning roster of world-class athletes, Eustaquio positioned himself as well-respected veteran from Mark Sangiao’s Team Lakay camp as he holds a respectable 9-5 record, with two wins coming by knockout and another two by submission.

Eustaquio continued to excel in the promotion’s flyweight division, even vying for the inaugural ONE Flyweight World Championship at ONE: RISE OF THE KINGDOM back in September 2014.

Known by the moniker “Gravity,” Eustaquio has won three of his last five matches since yielding to Moraes, including a first-round knockout victory over Malaysian stalwart Saiful “The Vampire” Merican in January 2016 and a split decision win over Thai rival Anatpong Bunrad in their rematch last May.

Eustaquio has the opportunity to cement his status as one of the best flyweights in the world today as he is set to face former flyweight kingpin Kairat “The Kazakh” Akhmetov in the main event of ONE: TOTAL VICTORY in Jakarta, Indonesia on Saturday, 16 September.

Although a tall order is in front of him, Eustaquio remains optimistic that he will have his hand raised in triumph as he is driven by his desire to become the best competitor in the organization’s 61.2-kilogram weight class.

“Nothing is easy. A person has to go through hardship to become successful. I know it will be hard, but I am willing to dig deep and get that victory. In order to be a winner, you have to endure. I am here to endure all the hardships because I want to be the best,” he said.

Eustaquio has improved steadily in all facets of the game, especially in the grappling department.
Although Eustaquio has re-created himself in the last three years, he gives a lot of the credit to his teammates and, of course, Sangiao.

“He is the best coach we have,” he stated. “He is a brother, a father, and a mentor. He always looks at things for the long run and treats his team as a whole team. I was inspired by Mark Sangiao. The hardship of life drives me to move forward and be the best in this sport.”

If Eustaquio plays his cards right against Akhmetov, a title shot could be on his crosshairs.

“I want this win. I want to have a remarkable winning result, and then I want to move forward onto that flyweight belt. I am back in the main event. My next goal is to be back in the title hunt,” he stressed.

The three-round flyweight encounter between Eustaquio and Akhmetov has serious title implications.

Akhmetov, who just recently lost his title to Moraes via unanimous decision in a championship unification clash this past August, still has the bitter taste of defeat in his mouth following what was the first loss of his career.

The 29-year-old Kazakh combatant would want nothing more than to get back in the cage with Moraes to regain the ONE Flyweight World Championship.

However, Eustaquio stands firmly in his way as the Filipino mixed martial artist restarted his flyweight campaign with the win over Bunrad in May.

With two hungry martial artists wanting to prove their worth and stake their relevance in the division, the winner of the marquee match-up between Eustaquio and Akhmetov might be next in line to dance with Moraes for the gold-plated strap.

“I am here for the challenge. I am not backing down. Do not miss the chance to witness when the good becomes better and the better becomes the best,” Eustaquio declared. “Bring it on!”