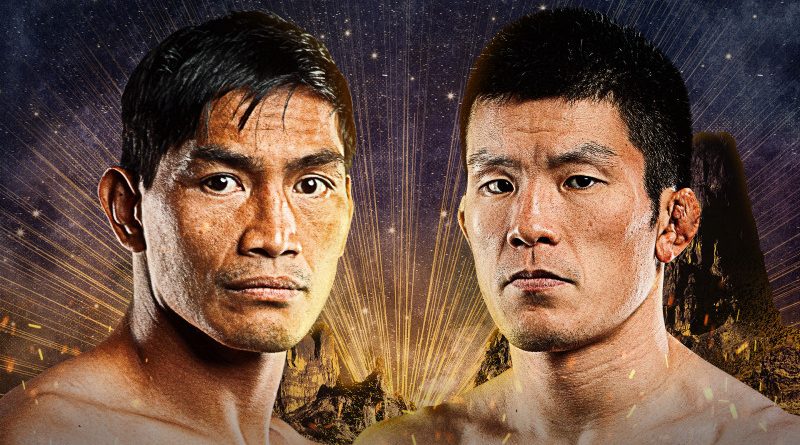 Multiple-time former ONE Lightweight World Champion Eduard “Landslide” Folayang succumbs to Shinya Aoki’s pantented submission, losing the triology while Filipino-American fighter Jackielou Buntan won her second ONE Championship fight in a row after outlasting Ekaterina “Barbie” Vandaryeva to take a majority decision victory during “ONE on TNT IV” held on April 29, 2021 at Singapore.

Folayang and Aoki met for the third time to settle the score once and for all in their storied rivalry and “Tobikan Judan”  was quick to replicate his victory in the second fight, engineering an armbar at 4:20 of the first frame to force “Landslide” to tap out.

The Japanese MMA legend cunningly avoided Folayang’s hard swings during the early stages of the round. While Folayang couldn’t connect his swings with serious intent, it was Aoki who actually landed a high kick that eventually led Folayang cornered by the Circle wall.

From there, Aoki briefly threatened with a flying triangle before changing gears and did what was expected of him, grappling Folayang to the mat.

As expected, Aoki was simply dominating on the ground. He triangled Folayang’s legs and then slid up to mount where he landed elbows. When Folayang tried to push away to escape further damage, Aoki hooked his left arm and spun off for an armbar to force the tap.

It was reminiscent of their second fight where Aoki also took Folayang down with ease midway through the opening stanza and it didn’t take long for the fight to be all but over as Aoki got his legs to the side of Folayang’s body and put on an arm triangle choke.

That put the Team Lakay veteran to sleep as he refused to tap, ending the bout with 2:26 left in the first.

“This is MMA everything happens. I prepared for the takedown but he got me. He’s like a snake, he’s very tight and he’s very calm on the ground. Huge congratulations to Shinya.” Folayang commented  in the post-fight interview.

Aoki improved his MMA career fight record to 47-9 with one no contest, 30 wins coming by submissions. He has won four in a row and claimed the trilogy with Folayang at 2-1. He called out both “Super” Sage Northcutt and Yoshihiro “Sexyama” Akiyama as his future opponents.

On the other hand,  Folayang drops to 22-11, losing three in a row and five of his last six, all to legit title contenders.

His string of loses makes his victory in the first bout of the triology, a masterful third round knockout that ended due to unanswered barrage of right hands, seems to be ages ago when it happened just in November of 2016.

This latest loss might have permanently cost him an opportunity for a ONE lightweight belt title bout  currently held by Christian Lee. Combined with the influx of talent coming to ONE, his realistic chances of regaining the strap he once wore is clearly coming close to zero.

Meanwhile, Buntan continued her unbeaten run in ONE with the close majority decision win over Vandaryeva.

Vandaryeva took the center of the Circle in the opening round, unloading wild right hands which baffled the Filipino-American into figuring out how to get past the lanky limbs of her opponent.

A few seconds later after trying some attack combinations, Buntan’s jab-hook-straight combos and low kicks seems the right mix to do the job.

Vandaryeva would still had control of the Circle in round two, using leg kicks of her own to sting Buntan’s thighs but the Boxing Works prodigy countered with combinations.

However, Buntan’s ring activity was still wanting as she would pick her spots and unleash a few swings, one of which was a trademark right hand that drew a smile from her opponent when it landed squarely.

“Barbie” also did a better job of controlling the pace of the frame, as she stayed on the outside and pumped long punches at Buntan whenever the latter tried to pierce her guard to seemingly take the round.

Sensing she is behind the score cards, Buntan then let all loose in the final frame. The Fil-Am pressed the action, slithered through Vandaryeva’s octopus-like limbs, and punished her foe with kicks and three-punch combinations.

One of those combos, a jab-left hook-straight right salvo, landed cleanly and gave her the confidence to attack with one final charge.

With that late success, Buntan got the nod of the judges as they handed her a majority decision win.

Her second consecutive ONE win improved her record to 22-5. It also dropped her name in the hat containing challengers for the vacant ONE Women’s Strawweight Muay Thai World Title.

Buntan was coming off a dominant unanimous decision win over Wondergirl Fairtex last February 26 in her ONE debut.

Vandaryeva saw her record drop to 58-10. She, however, expressed frustration on the result, believing she won the closely fought bout.