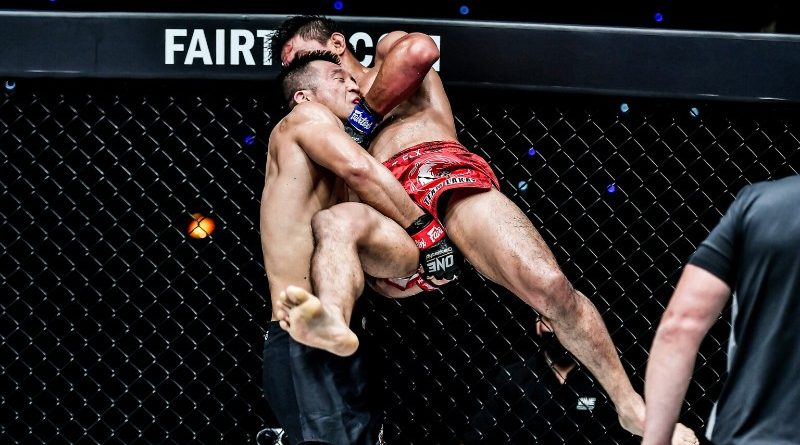 Eduard “Landslide” Folayang could not solve the grappling and takedowns of Chinese star Zhang Lipeng  to eventually absorb a unanimous decision loss in the main event of ONE: BATTLEGROUND II held on August 13 at Singapore.

Lipeng’s grappling and ground and pound proved to be the key element as he impressed in is ONE debut and continued his stellar run that includes 21 wins in his past 24 fights.

Both fighters sized up each other during the beginning minute of the first before Lipeng successfully took down Folayang and proceeded to control the bout at the dominat position and continually dished ground and pound until the end of the round.

Lipeng even secured the Filipino icon’s back and pounded away while threatening the end the fight early with a rear-naked choke.

That round build up a sizable lead that Folayang tried and couldn’t reverse in the next two rounds.

In the third and final frame, Folayang had more success defending the takedowns in the final frame as he continued to work Zhang’s legs to make the outcome still interesting.

He managed to stay on his feet and traded punches and kicks with his rival majority of the round.

But as the timer reached inside 30 seconds, Lipeng drove a masterful takedown, lifting Folayang in the air before throwing him down to the mat, to quash any doubts on who won the fight and seal the deal.

The Igorot warrior now has been on the losing end in his last four fights and six of the last seven, although the last three lasted the distance.  His record dipped to 22-12.

His only win during this lonely stretch was a unanimous technical decision against Amarsanaa Tsogookhuu on November, 2019 at the MOA Arena. The fight was stopped prematurely due to a cut he suffered caused by an unintentional head butt by Tsogookhuu.

Although he displayed a substantially better takedown and submission defense as evidently seen when comparing this fight to his previous showings, Folayang was not satisfied with his performance. He pointed to losing the first round as the key factor why he lost in the post-fight interview.

He also thanked ONE for still giving him fights as he reminisced his decade long stay in the promotion. He, however, reiterated he has not plans of retiring yet and that MMA fans can still expect entertaining fights from him. “I know that it’s not yet over. There’s a lot of things to be showcased.”, he said.

Lastly, he again exhibited his faith in the Supreme Being as the longest losing streak of his 14-year career continued to extend.

“I’m thankful to my team, especially my coach, my family, and God who are always there to support me in this endeavor. I know, it’s really tough. It’s painful to be in this situation but I know that my dream is much bigger than this failure.”, he declared.

Meanwhile, Lipeng improved his card to 31-11-2, He showed no rust despite almost two years of cage inactivity. He last fought Mohammad Naeemion September 2019, who he forced to submit by a triangle choke.

This post has already been read 1572 times!BAUKO, Mountain Province – Surviving signatories to the Mount Data peace agreement and