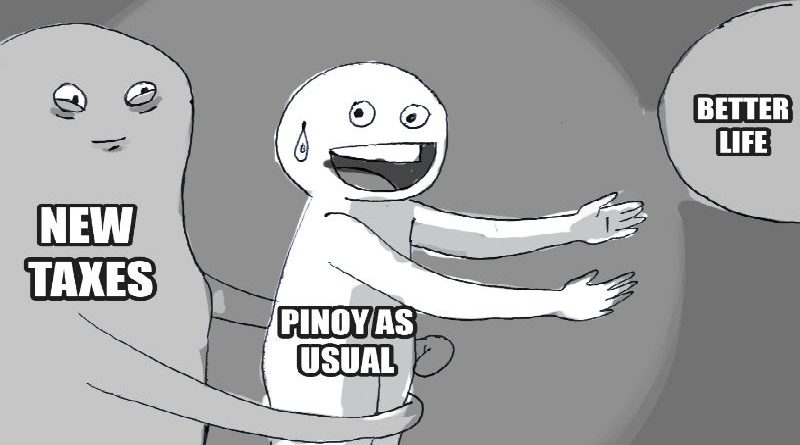 Taxes have been deemed as the lifeblood of the government, both local and national, Taxes are generated through the imposition of fees on the salaries and wages of people, the fees or levied on alcoholic beverages, tobacco, among others, including excise taxes value added tax among others. Under the annual budget of both the national and local governments, there are so-called internally generated revenues and externally generated ones that include the Internal Revenue Allotment (IRA) among their fees hat come from outside sources. One can already imagine on how a government can effectively and efficiently operate without the taxes that come from different sources that are also appropriated for specific purposes.

Ironically, the mandated periodic increase in taxes has been used by politicians, nationally and locally, to advance their own political interests. There were some national and local politicians who lost their re-election bid for their elected posts because they were linked to the increase in taxes being collected by the national and local government. Obviously, politicians are allergic when the issue being discussed is the proposed increase in the taxes because they want to appear as good leaders in the eyes of the electorate even if they had been involved in numerous controversies or have been non-performing assets of both the local and national governments. Tax issues had been used by traditional politicians to ruin the image of their rivals by projecting those proponents of tax measures s anti-poor because of the increased collection of taxes from the people among other self-serving reasons.

But if not for the taxes of people, major infrastructure of government had not been built over the past several decades, Basic services had not been cascaded to the remote villages of the country if not for the taxes that had been paid by good citizens who want the best for the government Numerous programs, projects and activities should have remained as purely proposals if not for the taxes that were allocated for such purposes to allow the people to benefit from the same. Government installations should have not have existed and the country’s security could have been over turned by insurgents of not for the uniformed personnel who have rendered their services to protect our country in exchange for their salaries aside from their patriotism and nationalism.

Increasing revenues so that there will be funds that could be further appropriated for high impact development projects hs been the battle cry of both the national and local governments. The national government provides funding support to the local governments  through the IR and other forms of assistance or opts to fund big ticket projects that transcends the boundaries of regions, provinces, cities, municipalities and barangays so that infrastructure and basic services will be able to reach the countryside. Admittedly, there are still numerous remote areas in the country that remin isolated because of the absence of sufficient funds that could be used to implement major projects that will translate to increased economic activities and sources of livelihood of the people.

We certainly agree with the current strategy of the national government to work on the improvement of major infrastructure projects that link different rural communities because it is the only way to convince people to stay in their places because of the presence of employment opportunities, economic activities that hasten growth and sources of livelihood that help uplift the living condition of the people. Certainly, the current allocation of the national government is insufficient to strike a balance in the development of the numerous communities that were established in the country.

We believe that one of the strategies to be able to work on the development of rural communities so that people will not flock to the urban centers to seek for greener pasture is empower the local governments to maximize the generation of resources within their areas of jurisdiction so that it he said provinces, cities, municipalities and barangays so that they will be able to share the burden of bankrolling smaller projects that are beneficial to their constituents and for them to have a share of such obligation in the development of the communities within their midst. Taxes re good if government will be able to optimize its utilization. The problem occurs when concerned government officials re not able to properly use the same for the welfare of the people and eventually lands in the corrupt hands of politicians nd their cohorts which should not be the case.

The public must therefore erase he impression that the imposition of additional taxes or increasing the same is adding burden to the poor Filipinos. Instead, it is allowing the people to share in the overall growth and development of  their own communities.

This post has already been read 2324 times!The city identified some twelve priority investment areas that are expected to contribute in efforts