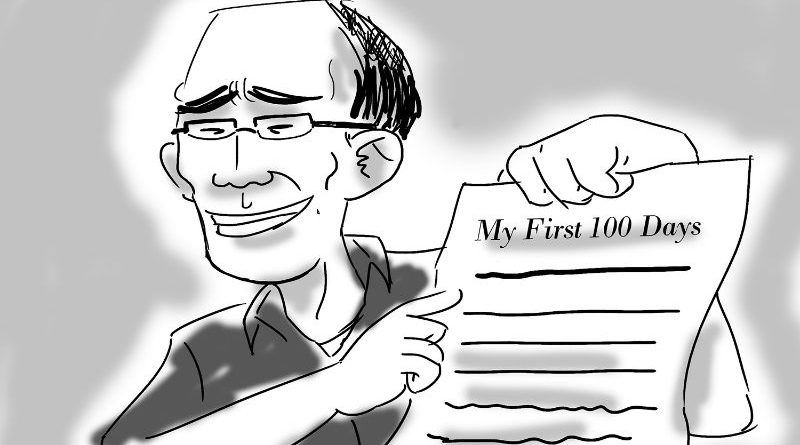 All newly elected and reelected local officials will mark their first one hundred days in their respective offices since assuming their positions last June 30, 2019. It has been an age-old tradition among our politicians to report to their constituents the details of their accomplishments the first 100 days of their assumption to office.

These first 100 days in office of our public officials serves as a barometer for us electorate to initially assess the competence of our present batch of leaders and a bellwether of the direction our leaders are leading us. It also allows our leaders to reflect on the thrusts they have adopted for their local governments, and how their programs, projects and activities are all congruent to what they have promised and planned for their constituents.

These public officials had promised to their constituents a better situation during the campaign period up to the time they took their oath of office. Some of them came out with strong commitments empower their people to be partners in initiating change in their communities. Many promised to bring development in the communities, mostly infrastructure projects. Some of them opted to promise to continue the programs and projects already in place, with some innovations in the process of pursuing growth and development.

The first months of our new set of leaders is a time when constituents have high expectations of their officials, both supporters and otherwise, with a wait-and-see attitude on how the campaign promises are to be fulfilled and for indications that better times are ahead. This is also an adjustment period which may have been painful for some of the officials, the government employees,  and the people, because of certain unexpected changes that affected their daily routine. For sure, there were changes in the way business is transacted with some government offices. For some elected public officials, it may be sustaining and continuing with their assigned duties and responsibilities while working on innovations to improve the implementation of their programs and projects to enhance the delivery of basic services to their constituents.

The period of adjustment on the part of the local officials, the government workers and the public is probably over now. This is now the time for the local officials to make good the election campaign promises they made. One hundred days is enough time for new officials to work their way through the complex processes in government – generating funds, allocating the same for priority projects and strategising how to implement their programs and projects for the welfare of the greater majority of their constituents.

On the part of mainstream media, the honeymoon period is now coming to an end. Despite the efforts of some politicians to discredit the mainstream media in favour of their social media platforms, mainstream media will survive and pursue its mandate as the fourth state in our society.

It behooves us to listen well to the reports of our local officials as their 100 days in office is coming to an end. We have to be circumspect in deciphering on whether or not our local officials are reporting on the true state of our communities as we experience it. Surely, not all that comes out of the mouth of our officials reflects our communities’ real situation that is why it is best for us to be critical in dealing with the colourful speeches of our leaders.

We still have a long way to go towards the completion of the three-year term of our public officials, and we are given a taste of their performance on the first 100 days. For those who were able to do what is right, the best is yet to come. For those who have lackluster performance, we, their constituency must make them account as early as now on their poor performance. We must not say the worst is still to come. It is the time to help steer the direction of our poor performing officials towards the goal of accountable, transparent and  good governance.

We should read between the lines of the powerful statements being issued by our leaders. We should remember that many times, the more our public officials talk, the more things they want to cover up. As the Chinese would say, ‘less talk, less mistake.”

Let us continue to participate in our own development by engaging our officials critically and productively, as we also bestow them our trust and confidence. They have different approaches in their work and for the rest of their term, let us contribute our ideas in the proper forum towards our own development and welfare. Let us be vocal about what we think is right for us. Let us not allow our leaders to bully us because once we keep quiet, our silence is the green light for their questionable activities and the death of our right to participate. It takes a critically concerned citizen to make a good community.