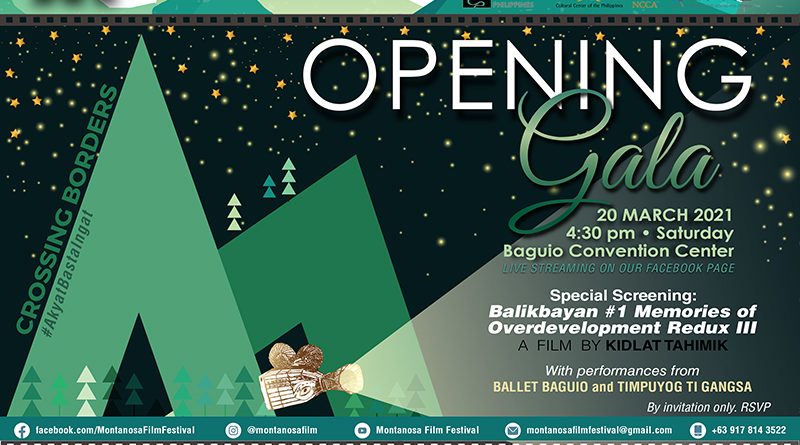 The first-ever Montañosa Film Festival is set to kick off in style with its exclusive, invite-only Opening Gala, which will be held at the Baguio Convention Center on March 20.

However, in compliance with strict safety and health protocols, only 100 people will be allowed to be within the venue at any given time.

The gala will feature an exclusive screening of National Artist Kidlat Tahimik’s film, Balikbayan #1: Memories of Overdevelopment Redux III, and will be graced by performances from Ballet Baguio and Timpuyog Ti Gangsa.

The event will also be livestreamed for public viewing on the MFF Facebook Page.

The launch of the MFF will also coincide with the reopening of Burnham Park’s Rose Garden, which will by then be in full bloom.

On March 20 and 21, the MFF, in collaboration with the City Environment and Parks Management Office, will offer screenings of the MFF’s TBA Studios Collection of films at the Rose Garden, in addition to screenings of French children’s film Kirikou et la Sorcière (“Kirikou and the Sorceress”).

March 27 to 28 will see these screenings relocating to Burnham Lake, where they will be projected from the observation deck, with boats allowing a limited number of viewers to enjoy the films while observing social distancing.

Other MFF film collections, such as Euro Cine, Cine Asya, the Luzviminda Collection, and Cine Cordillera, will be available for viewing courtesy of the MFF’s various screening partners across the city, including the Baguio Country Club, Grand Sierra Pines Baguio, Holiday Inn Baguio City Centre, Le Monet Hotel, and The Manor at Camp John Hay.

Another major venue partner for the MFF is the Civil Aviation Authority of the Philippines and the Management of the Loakan Airport, where, from March 25 to 28, a drive-in theater concept will be simulated, with only 50 cars (maximum four people per car) to be allowed within the audience at any given time.

Mornings at the airport will feature the Musiklamon Food and Music Fair which will feature local musicians and local culinary experiences. Screenings will start at sunset and conclude at least two hours before midnight.

It is also at the Loakan Airport that the MFF’s Films In-Competition category will premiere.

These ten films, which were selected out of a total of 46 entries that were submitted to the MFF late last year, were produced by ten up-and-coming independent homegrown filmmakers from the Cordilleras. Each filmmaker was provided a P40,000 grant to produce their respective films.

To help realize the full potential of their films, the finalists have been introduced to multiple opportunities for mentorship experiences with the biggest names in the industry, including a Pitch Lab with scriptwriter Emman Dela Cruz; a one-on-one mentorship activity with scriptwriter Moira Lang and director Dean Colin Marcial; and the FDCP-sponsored FDCP Film Talks, which featured producer Gale Osorio, scriptwriter Fatrick Tabada, director Sheron Dayoc, and cinematographer Martika Escobar.

This guidance will continue even during the festival proper with the continuation of the MFF Film Lab series, which will be held at UP Baguio’s Teatro Amianan.

The series will feature a two-part editing lab with Dean Colin Marcial and editor Abi Lara on March 22 and 25; a pitch lab with Emman Dela Cruz, and a pitch lab for international co-productions with producer Alemberg Ang (both on March 24).

CCP President and NCCA Chairman Arsenio “Nick” Lizaso will also grace the MFF for the picNICK Finalists’ Picnic on March 26, where finalists will have the opportunity to chat with Mr. Lizaso and, in the process, “pick Nick’s brain.”

The festival will close with its Awards Night on the 28th, which will also be held at Loakan Airport.

Equally important to the goal of promoting the region’s creative talent and traditions, however, is the paving of the road toward the Cordillera’s economic recovery through film tourism.

Riding on the wave of success film tourism has experienced in the past two decades, the festival aims to bring exposure to Baguio Creative City and the Cordillera region and re-ignite the city’s tourism industry, which was brought to a standstill by the COVID-19 pandemic. Baguio will plays a central role in bringing this revival to the rest of the Cordillera Administrative Region.

The MFF is an official City event supported by Executive Order No. 6, Series of 2021 issued by Mayor Benjamin Magalong, which designates March 20-28 as MFF Week. The event is  spearheaded by the Baguio Tourism Council, through TWIMEDIA under the helm of Festival Director/ Filmmaker Ferdinand John Balanag.

The international film component of the festival is fueled by the support of various embassies, including those of France, India, and the Czech Republic.

The MFF’s main beneficiary is Good ACTS (Artists, Craftspeople, and Tourism Support), a community initiative of mutual support among the city’s artists amid the pandemic.