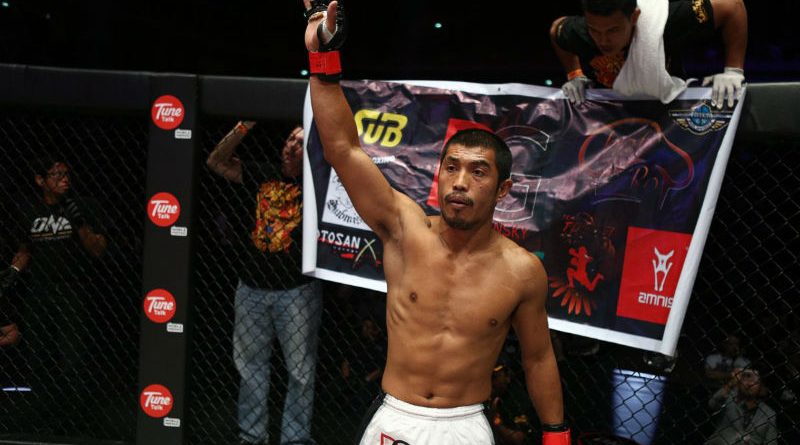 Eric “The Natural” Kelly decided to venture into a new territory as he moves up in another weight class after competing as a featherweight since he started his prizefighting stint eight years ago.

Kelly spend 15 professional bouts as a featherweight. He will be making his lightweight debut against Japanese MMA legend Kotetsu “No Face” Boku on the undercard of ONE: KINGS & CONQUERORS, in Macao, China on August 5.

Kelly sees his jump to ONE Championship’s 77.1-kilogram weight class as a new chapter in his illustrious run as a world-class MMA athlete.

“It’s a new beginning for me. It’s somehow a permanent move since this is my walking weight. We have to abide by the weigh-in rules of the company. I am comfortable with the weight,” he said.

“I am excited to be in this new journey. I hope everything will turn our great for me as a lightweight,” Kelly added.

Kelly is looking to erase painful memory dealt by his last two outings as a featherweight competitor that resulted to throbbing setbacks.

“It’s been a year since the last time that I fought. I am looking forward to put on a great performance for my beloved country. I have been training hard and going through strategies. I hope to give my 110 percent inside the ONE Championship cage in Macao. I am coming to win,” he stated.

Even if Boku presents too much danger in the striking department, Kelly has no qualms when it comes to trading kicks and punches with the highly-touted Japanese combatant, who has the experience of a seasoned veteran with more than 30 professional matches on his resume.

Resorting to his bread-and-butter is stylistically the obvious option for Kelly, but he sets his sights on a knockout win.

“I am prepared wherever the fight goes. If there’s chance to submit him, I will submit him. If there’s an opportunity to knock him out, I will go for it,” he bared.

Boku utilizes his dynamic boxing background with well-regarded grappling arsenal to subdue his opponents to become a constant crowd pleaser. He, however, tasted five of his 11 career losses by way of submission.

Kelly asserted that he has a fair share of knowledge in terms of delivering blows from a toe-to-toe stance. “I might be known for my submission wins, but I also have striking in my skill-set,” he reminded.

“To tell you honestly, I am in a very tough fight. It’s nerve-wracking in a sense, but I am ready to accept the challenge,” Kelly said about the marquee match-up. “I want to trade strikes with my opponent. He is dangerous in that aspect, but I can see some loopholes.”

Before becoming an MMA fighter, Kelly was first introduced to Yaw-Yan, a Filipino style of kickboxing with emphasis on hip-torquing motion and delivering attacks from long range as well as the downward-cutting nature of its kicks.

After mastering Yaw-Yan, Kelly then transitioned to Wushu Sanshou, where he represented the Philippines in various international tournaments from 2001 to 2004.

When Kelly started his MMA career in 2009, he has been heavily regarded as a submission specialist, owning nine triumphs by way of forcing his foes to tap.

The last time that Kelly knocked out an opponent was in August 2012 when he stopped former UFC lightweight titleholder Jens Pulver in the second round with a left roundhouse kick to the body.

“I am looking for statement win this time around. Knocking him out will be an accomplishment because he is a good fighter and a tough opponent,” Kelly stressed.

While championship gold has always been his ultimate goal, he does not want to rush into it like he would when he was younger.