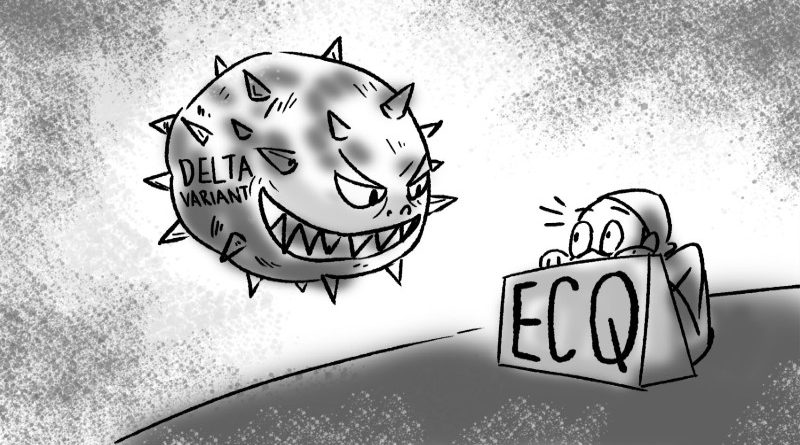 The government was previously gaining ground in the fight against the dreaded coronavirus disease (COVID-19) with the arrival of vaccines during the early part of this year. There were also high hopes among the people of bright prospects to get back to normal once the country achieves population protection and herd immunity. However, the sudden emergence of several variants of COVID such as the Alpha, Beta and the latest, Delta which is highly contagious and more infectious, virtually stalled the gains already achieved. This brought the ongoing efforts to curb the rapid spread of the virus back to the drawing board.

Various countries in the world affected by the new variant are now experiencing surges in cases thereby compromising their respective health care system and further stressing the hardworking frontliners. Our government does not want these to happen to our country, thus, the government is now trying to work out possible solutions on how to control the entry of the variant in the different parts of the country. While the Delta variant is now wreaking havoc in the National Capital Region (NCR), Western and Central Visayas, Northern Mindanao, among others, various local governments are striving desperately to delay the entry of the said variant in their respective places by putting in place the needed interventions not to have their health care system compromised and their health workers stressed.

The government is now torn between trying to strike a balance between the gradual and safe revival of the economy and protecting the health of the people. However, at this point in time, the health and safety of the populace is most urgent.  This is the consideration why the inter-agency task force for the management of emerging infectious diseases decided to impose the highest level of community quarantine, the enhanced community quarantine (ECQ), in Metro Manila in the hope that the thread of the spread of the virus will be broken, particularly the Delta variant. In the next two weeks or so, it will be very difficult for people to be moving around in Metro Manila with the strict implementation of the restrictions under the lockdown. This has led to the exodus of people with enough resources to flocked to the different parts of the country to spend their break outside of the NCR, in such areas like Baguio City. Incidentally, upon learning of the exodus of people from Metro Manila, different local governments started to implement stricter border controls much earlier to contain the influx of people claiming to be residents of the said localities with the use of fake identification cards and other related documents.

In fact, there are reports in the past that there was already mass production of fake identification cards in Recto in Manila to show that the bearers of the same are residents of their desired places of destination. Although there were initial detections by the police on the use of fake ID cards and other related documents on people wanting to enter their areas of jurisdiction, there were others who already entered the said areas. This should alarm local authorities as those who entered with fake documents might be carriers of the virus.

We had been advocating for the timely and speedy implementation of vaccination among the members of the priority sectors amidst the shortage of the supply of vaccines. The move to bring the vaccination to the district health centers coupled with the mobilization of mobile vaccination teams and the option to conduct house-to-house vaccination is a laudable effort on the part of government agencies and the local governments.

Truly, there is already high acceptance by the people of available vaccines that is why the government must continue existing efforts to put pressure on the pharmaceutical companies to deliver the purchased vaccines for the enhanced inoculation of most of the population to help deter the rapid spread of the new and much deadlier variant.

More importantly, everyone must do their part by making sure that they strictly adhere to the basic health and safety protocols which are still the best weapons to prevent individuals from contracting the virus.

Let us not only rely on the government to win this hard-fought battle against the unseen enemy. Let us also do our part by having ourselves vaccinated with whatever available vaccine. Let us help the government implement the mass inoculation program by making ourselves available for vaccination once there will be available vaccines. What needs to be done is for local governments to fix their vaccination systems to avoid the lining up of the people in the vaccination centers that might expose them to contracting the virus in the end.